European missile maker MBDA is readying its offer to answer an increasing need for coastal defense missile batteries. Among others potential customers is the Hellenic Navy, Naval News learned at DEFEA 2021.

« It’s a long tradition here in Greece to operate our coastal battery », Stefano Bertuzzi, Head of Naval Systems at MBDA, told Naval News. Greece was also the launch customer for the MM38 Exocet version 50 years ago, he pointed out.

The Hellenic Navy’s exact need remains officially unknown. According to articles dating from  2017, such program could involve the purchase of two new batteries for a total cost estimated to be 100-120 M€.

« We are glad to present the latest generation of coastal battery for which we have today two export customers », Bertuzzi added. The system is based on the latest version of the Exocet MM40 Block 3 missile, which provides a 200 km effective operational range at high subsonic speed.

It is also « a very good solution for aerial denial thanks to the ability of the Exocet to operate in complex environment (…). Thanks to the very long range, you can have a denial access capability over a large area ».

A highly mobile system, MBDA coastal battery can be fitted on almost every 6×6 or 8×8 military truck, with final integration and industrial qualification being performed in Genoa by MBDA Italy.

One of two existing customers for MBDA’s coastal defense system is Qatar, which signed a contract in September 2016 for an unknown number of systems for the Qatari Emiri Naval Forces (QENF). 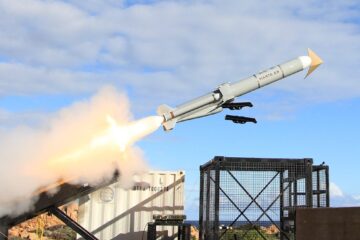