BAE Systems Naval Ships is preparing to ‘float off’ the first of the UK Royal Navy’s new Type 26 frigates at the end of this year.

The future HMS Glasgow is currently fitting out on a hardstanding at the company’s Govan shipyard in the west end of Glasgow.  The semi-submersible barge that will be used to carry the ship down the River Clyde arrived at the yard last month.

Naval News understand that the float off operation is scheduled to occur in December. Glasgow will be driven onto the barge, which will then be moved down river to a deep-water area of the Clyde estuary to dock down, allowing the ship to be floated off.

Glasgow will subsequently be towed back up the Clyde to BAE Systems Naval Ships’ Scotstoun facility where it will be dry docked for further outfitting, test and commissioning. The whole operation to transfer the ship from Govan to Scotstoun is expected to take about a week.

Delivery of the first-of-class is now planned for 2026, having been delayed by approximately 12 months. This is attributed to supply chain delays affecting the delivery of the ship’s gearbox, and the wider impact of the Covid-19 pandemic.

Work continues at Govan on the two other Type 26 Batch 1 ships. Structural steelwork is now at an advanced stage for the second ship, Cardiff, in the yard’s Ship Block Outfit Hall; the third ship, Belfast, is in the early stages of fabrication.

BAE Systems is in advanced negotiations with the UK Ministry of Defence for the five-ship Type 26 Batch 2 order, which will sustain its core workload into the mid-2030s. It also sees a number of opportunities emerging from the UK’s refreshed National Shipbuilding Strategy, and is also looking to re-enter the export market.

Central to these ambitions is the build of a new covered assembly facility on the Govan site which will allow two Type 26 frigates can be consolidated alongside each other. Planning consent has been sought for the infill of the existing wet basin on the west side of the yard, and erection of a new ship assembly hall together with ancillary facilities and associated infrastructure.

According to BAE Systems, the new assembly facility will significantly improve the pace, efficiency and predictability of the manufacture and outfitting process: the existing facilities on the Govan site do not allow for the consolidation and outfitting of a Type 26-size ship under cover. 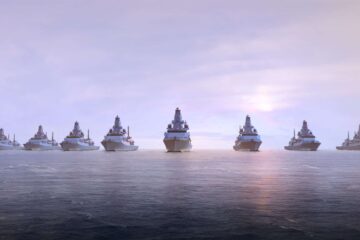