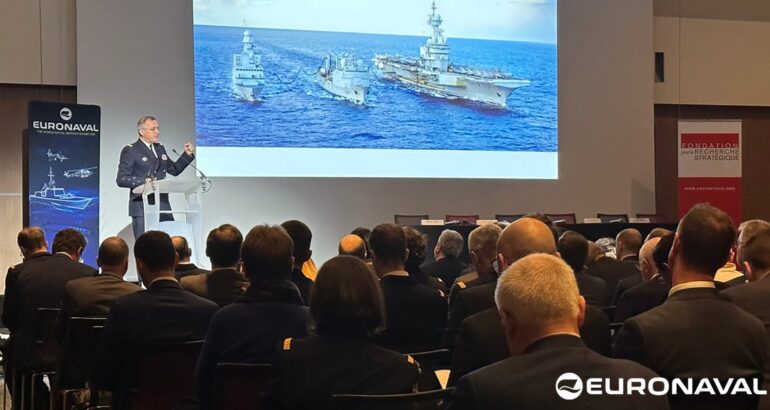 Euronaval 2022 Colloquium: Setting the tone for the week ahead

Relegated to the past after the end of the Cold War, high intensity combat has been progressively re-emerging as a threat with the resurgence of peer and near-peer confrontation. Yet in the 21st century – often dubbed the ‘maritime century’ – high intensity combat is going to be significantly shaped by the speed of technological innovations. Weapons are not only becoming increasingly precise, they are also designed to deliver such strike at growing ranges. Technologies such as unmanned systems have the capacity to saturate detection, identification and classification systems, increasing theatres of operations’ complexity and tempo. And, last but not least, the operational domain has expanded across all dimensions, with sensors and capabilities distributed from seabed to surface and all the way into space. Today, whether at sea, from ship to shore or from shore to ship, it is more difficult than ever to hide in the maritime battle-space.

The invasion of Ukraine, in February 2022, highlighted the consequences of these shifts for naval warfare. As it becomes increasingly difficult to hide, navies must prepare themselves for confrontation. War at sea is not only violent and decisive, it can also be crippling: rebuilding a destroyed fleet can take generations. Navies must also train to be flexible, quickly adapting to change and capable of operating even when systems fail. Fail safe technologies are desirable but nearly impossible to develop; operating in an environment where it is safe to fail is, on the other hand, achievable through tactics, strategies and training. Finally, nobody can afford to go it alone. Interoperability with allies and partners is a critical element of success and is fostered through regular joint exercises – something NATO excels at.

Developing and delivering technological solutions that will support navies in facing these threats is a challenge in and of itself. While there may have been an uptick in defence budgets over the past decade, in many instances these increases were insufficient to address all the emerging challenges. Navies and industries have therefore had to develop new solutions and tactics to fill the gap created by past disinvestments.

Key among those are unmanned systems. Whether below – Unmanned Underwater Vehicles (UUV) -, on – Unmanned Surface Vehicles (USV) – or over – Unmanned Aerial Vehicles (UAV) – the sea, these systems offer three key advantages: extended ranges for Intelligence, Surveillance and Reconnaissance (ISR) and strike; improved communication, acting as relays and nodes across multiple domains; distributed operations, facilitating the element of surprise against adversary forces.

Increased connectivity has also become a central capability in a battle for early detection, identification and classification across multiple platforms and domains. Being able to share information in real time, and doing so without avoid communication interception or corruption, is one of the foremost challenges of the 21st century. This is not only relevant for key platforms and unmanned systems – in particular to enable Manned/Unmanned Teaming (MUM-T) – but also for missiles, which are gaining increased autonomy but retaining a man-in-the-loop. In fact, connectivity is an essential element in developing trust between crew and unmanned systems in a world where technologies, such as Artificial Intelligence (AI), are enabling growing levels of autonomy.

Finally, space has become the new frontier – to some, even, the new Wild West. As space technologies, such as satellites, become more affordable, the space domain becomes ever more crowded, creating new opportunities and challenges in equal measure.

The concluding remarks of the colloquium highlighted a number of key words that emerged throughout the morning: change and collaborative combat to tackle the complexity of the new battlespace; interoperability because no one nation or armed service can go it alone; technology to increase reaction time and facilitate adaptability; economy and industrial support to be able to deliver the necessary capabilities, faster and through more iterations between industry and navies; and, the element surprise, both being prepared for it and being able to deliver it.