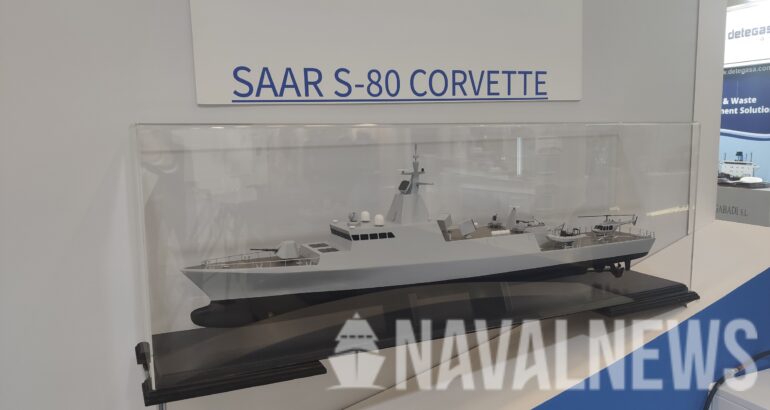 Israeli Shipyards introduced the new SAAR S-80 multirole corvette during the Euronaval 2022 exhibition held in Paris. The vessel is an export version of the Israeli Navy's future Reshef-class corvette.

The SAAR S-80 is based on the Reshef-class from the Israeli Navy, which herself is an evolution of the S-72 corvette. For the record, Israeli shipyards has been awarded contract for the design and construction of new ships meant to replace the Israeli Navy’s in-service Sa’ar 4.5 missile crafts. The company signed a detailed design contract on August 26. 2021.

“The ship is designed for stealth, agility and ruling the seas with cutting edge capabilities required in future combat scenarios.”

“The S80 ship will enable navies to effectively protect their country’s sovereignty, maintain their economic waters, and win naval battles in times of war.  The S80 has the endurance to operate in the open sea, and also to control the littoral. All this with optimal cost benefit ratio.”

Regarding technical specification the S-80 is a 80 meters long ship with a beam of 11 meters and a draught of 3.25 meters. Her displacement is about 1000 tonnes, and is powered by 4 diesel engines which allow a maximum speed of over 28 knots and a cruising speed of 14 knots. The vessel has a complement of 53 plus 20 passengers.

The SAAR S-80 can accommodate helicopter aboard on its flight deck, however there is no hangar. The helicopter type has not been specified. On the aft deck, two LARS are installed for two RHIBs. Once again, their dimensions were not disclosed.

The weapon suite is modular and can be adapted according to customers’ needs. Israeli shipyards confirms the ship is “capable of being equipped with the combat systems made by the Israeli defense industries or / and any equivalent systems according to the customer requirements.” SAAR S-80 can be fitted with surface-to-surface and surface-to-air missiles, 76mm main gun, remote controlled stabilized guns up to 30mm, and electronic warfare systems.

With the modularity of her equipement, the S-80 can be configured as corvette or as an OPV version, depending on the operational requirements.