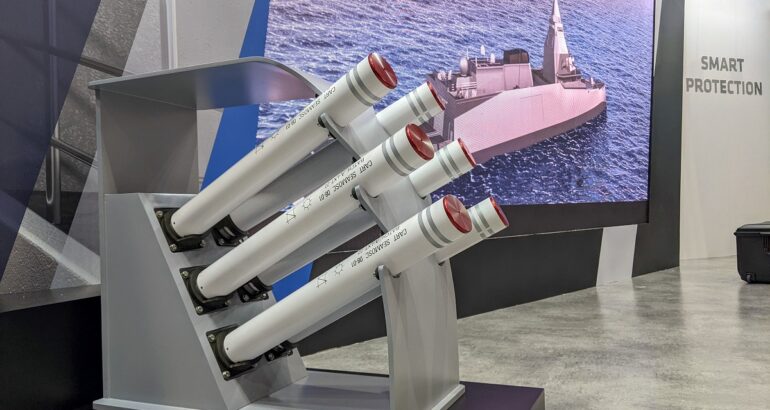 The new SEAMOSC launcher by Lacroix.

The new SEAMOSC module was developed by Lacroix to counter threats guided in the visible range or by Laser. To do so, the launcher deploys a smoke screen specifically designed for the naval environment:

MOSC stands for “Masking Optronic Screening”. The concept retained for the SEAMOSC launcher is in line with the existing SYLENA launchers:

SEAMOSC is available in two configurations depending on customer requirements: 6 ammunitions or 9 ammunitions. Each launcher can be easily reloaded by the crew, even when the vessel is underway at sea.

The new SEAMOSC launcher comes ten years after the launch of the first SYLENA DLS. It is also the fourth launcher in the family, highlight Lacroix’s innovation capabilities. The SYLENA DLS range now consists of:

Following a call for projects from the Agence Innovation Defense (the French DARPA), for which a LACROIX proposal was selected, the company continues to work on a technology for the implementation of OBAD (jammer embedded on a UAV), a solution which is one of the candidate systems for future FDI self-protection.

This project, named VESTA (Véhicule Ejecté Support Tactique d’Autoprotection), unveiled by LACROIX during Euronaval 2020, has been conducted in a collaborative approach that integrates state actors (AID, DGA, French Navy…), and several civilian or defense companies of the European Defence Technological and Industrial Base.