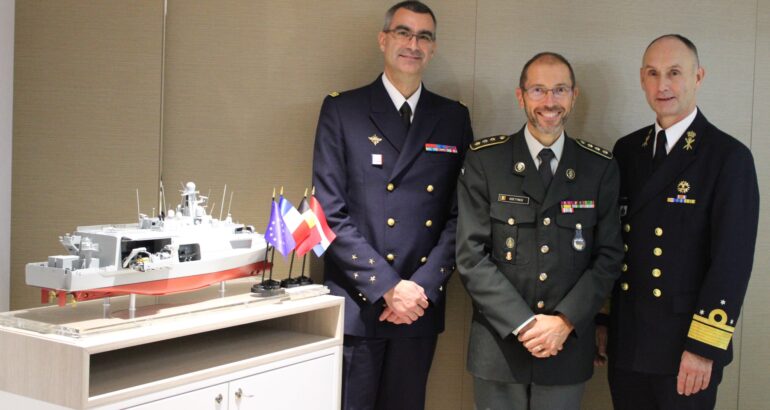 At the Euronaval 2022 exhibition, France, Belgium and the Netherlands have agreed on a cooperation aimed at promoting synergies and mutual benefits within the mine warfare domain.

The partners’ main objective is to increase the effectiveness of their respective programs and to strengthen the interoperability of their national mine warfare systems. It is now confirmed that the rMCM mothership will be used as a basis to answer the French Navy “Bâtiments de guerre des mines” (BGDM) need, which are to be ordered next year.

This agreement was formalized on Tuesday, October 18, 2022 during a meeting between representatives of the Directorate General of Armaments (DGA), the Directorate General of Material Resources (DGMR) and the Netherlands Defense Materials Organization (DMO), respectively the general engineer Gael Diaz de Tuesta, lieutenant-general Frederic Goetynck and vice-admiral Arie Jan De Waard.

France has notably confirmed its decision to launch the design of French mine warfare vessels on the basis of the Belgian-Dutch rMCM mothership being built by Naval Group.

“Thus, the nations share the goals of maximizing design communities to create opportunities for specific joint in-service support and other joint activity related to mine warfare capabilities”

The French ships should be ordered in 2023, with a delivery date under discussion, via the SLAM-F program. For their part, the 12 ships of the Belgian Navy (6) and the Royal Netherlands Navy (6) will be delivered from 2024. The first-ship-in-class will be the BNS Ostend based in Zeebrugge, Belgium. Deliveries will then be staggered until 2030.

Building on 30 years of cooperation in the field of Tripartite-class minehunters, France, Belgium and the Netherlands now reaffirm their desire to increase their integration and effectiveness in the MCM field. They also recognize that the cooperation in this area remains more necessary than ever to meet the challenges of tomorrow and strengthen European defense capabilities.

These specialised mine warfare vessels are the first to have the capability to embark and launch or fly a combination of surface drones (themselves 12-metre, 20-tonne vessels), underwater drones and aerial drones. The MCM vessels will use a fully robotic system for detection, classification and neutralisation of mines. They can withstand underwater explosions and have very low acoustic, electrical and magnetic signatures, in line with the missions to be carried out.

These MCM vessels have the following characteristics: