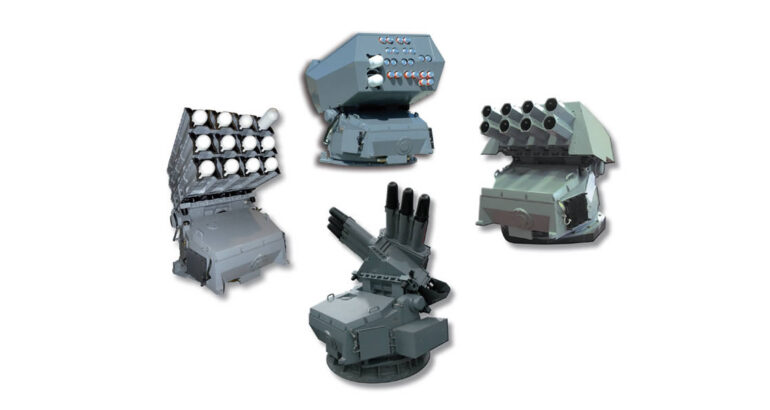 Safran Electronics and Defense has taken the wraps off a new variant of its NGDS (New Generation Dagaie System) trainable decoy launcher as it looks to broaden the market for the system.

Known as NGDS Configuration D, the modified launcher has been engineered for compatibility with NATO standard 130 mm countermeasure rounds. All previous NGDS launchers have been configured to fire decoy rockets supplied by Lacroix Defense.

NGDS uses a stabilized two-axis launcher able to train very rapidly in both azimuth and elevation in order to achieve placement of the decoy with high accuracy. Safran describes the system as “a versatile and highly capable platform suitable to fire a wide variety of anti-missile/anti-torpedo ammunition, of both the mortar and rocket types, whether chaff, flares, obscurants, corner reflectors, anti-torpedo, passive or active, of various calibers up to 150 mm.”

“It is able to deploy several tactics, thereby defending the ship against attacks from multiple missiles simultaneously without reloading.”

Earlier this year it was revealed that Safran had been selected to supply an undisclosed variant of NGDS to satisfy the trainable launcher requirement associated with the Canadian Surface Combatant program. Acquisition of countermeasure rounds is being pursued by Canada independent of the launcher procurement: Safran has committed to integrating whichever ammunition is selected by Canada. Contacted by Naval News, a company spokesperson said:

“Safran E&D confirms that it was awarded a contract from MDA to supply the trainable launchers (NGDS type) for the future Canadian Surface Combatants program.
NGDS is a versatile and highly capable platform suitable to fire a wide variety of AAW/ASW ammunition, of both the mortar and rocket types, whether chaff, flares, obscurants, corner reflectors, anti-torpedo, passive or active, of various calibers up to 150 mm.
It was selected thanks to its capability to accurately project “credible” decoys, i.e., exhibiting for example realistic radar cross section, infrared signatures even for large ships. It is also able to deploy several tactics, thereby defending the ship against attacks from multiple missiles simultaneously without reloading.”

Safran is proposing the configuration D variant of NGDS in order to promote compatibility with the 130mm RF and IR countermeasures cartridges already in service with a large number of NATO and allied navies. An image released by the company shows the 12-round launcher sharing the same common traversing/elevating mount as earlier NGDS variants. However, the barrel modules fitted atop are designed to accommodate both mortar-launched and rocket-fired 130 mm decoy rounds.

The company’s initial focus for NGDS Configuration D is the UK, where the system is being bid into the Electronic Warfare Counter Measures (EWCM) Increment 1a program. EWCM Increment 1a is intended to procure a new trainable decoy launcher, capable of deploying both future and legacy rounds, for installation on Royal Navy Type 45 destroyers, Type 26 frigates, and Type 31 frigates.

Safran additionally sees other opportunities emerging in Europe, with Denmark and the Netherlands top of the list. Australia is also looking for a trainable launcher for its Sea 5000 Hunter class frigate program.

Mr. Bonny introduced the decoy launchers designed and produced by the company: