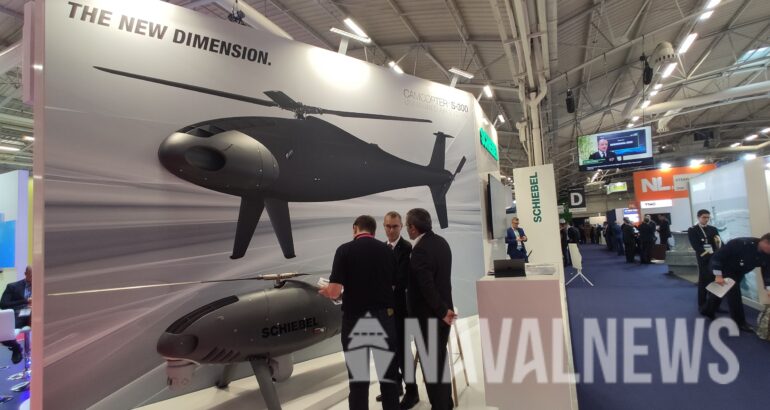 As UAVs competition grows including in the naval domain, Schiebel decided to fill a gap in the heavy-lift-capable unmanned air system (UAS) market with the Camcopter S-300, a larger version of the Camcopter S-100.

The Austrian company Schiebel took advantage of the Euronaval exhibition held in Paris to give a sneak preview of the new Camcopter S-300. This VTOL UAV has an extended range and enhanced payload capacity compared to its little brother the Camcopter S-100, already in service in numerous of navies and governmental services.

Schiebel developed this VTOL rotary wing drone based on its experience and feedbacks gathered with S-100. The applications are basically the same meaning ISR operations.

Regarding the technical specifications, according to Schiebel, the UAS is 4.8 meters long, 1.9 meter high and 0.9 meter wide. It can fly at a maximum speed of 120 knots (cruising speed 55 knots). Size apart, the true difference compared to the S-100 system is the payload capacity. Indeed the S-300 is able to carry up to 340 Kg (fuel including) and its maximum take-off weight can reach 660 Kg. This is basically three times more compared the S-100 can carry. With a 50 Kg payload, the S-300 can fly up to 24 hours (4 hours with 250 Kg).

According to Schiebel, a triple-blade folding rotor system allows the storage of to S-300 UAVs and one ground control station (GCS) in standard 20-feet container. The company highlights the few accessories needed to launch or recover such UAV and its capability to be stowed and maintained in confined spaces including in ships’ hangars.

To make it easier for the customer, Schiebel has kept the same GCS as the one used by S-100, this way the users can seamlessly transition to operate the S-300 with no additional operator training.

Even though Schiebel announces it is filling a market gap, Airbus Helicopter is already positioned on this segment with the VSR 700 UAV. For the record, the French Armament General Directorate (DGA) signed a procurement contract with Airbus Helicopter for a second prototype of this sytem, which is being developed within the frame of the SDAM (Système de drone aérien de la Marine) programme for the French Navy.