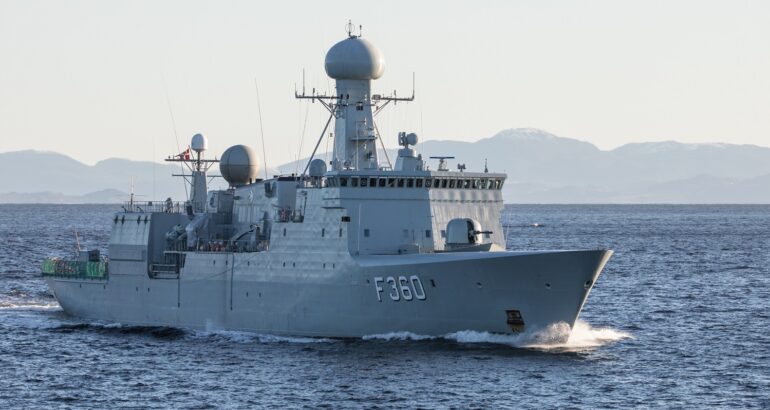 Danish company SH Defence has demonstrated a modular approach to mine warfare operations.

Using computer-generated imagery in a presentation given at Euronaval 2022, the company showed how its modular payload concept called The Cube, which was first launched in 2020, could use a container-based, autonomous mine-laying concept to deploy between two and four mines per minute, depending on the mine type. The mines were deployed via a multiple container payload set-up, with containers switching position using The Cube’s physical infrastructure, the Skidding System.

As shown with the mine-laying demonstration, the Cube concept offers a contemporary approach to capability modularity at sea.

“The Cube is two things. It’s first and foremost a modular system able to adapt to different kinds of technology. In these times when technology advances so fast, having a system that is not fixed to the superstructure of the ship is of benefit to navies,” Peter Liisberg, sales and marketing manager at SH Defence, told Naval News at Euronaval.

“Second, is the infrastructure to handle these modules, because if you don’t have access to the three domains – surface, sub-surface, and air – then filling up a platform with capabilities is just storage,” Liisberg added.

Drawing on Denmark’s original ‘STANFLEX’ concept and targeted particularly at frigate and offshore patrol vessel programmes, The Cube is based on the idea of loading equipment in standardised container sizes, and making the capability available at sea to function when needed, Liisberg continued. Space requirements at sea are a mission bay fitted with twist locks, with the Skidding System using hydraulic or electrical power to move the containers. The Skidding System can operate in conditions up to Sea State 5, meaning that payloads and deployed capabilities can be switched at sea.

“In a way, we would rather not talk about containerised modules, because … people start to think we are loading containers. No: we are loading payloads,” said Liisberg. The concept is also payload-agnostic: “We provide the base frame equivalent of [certain]-sized shipping containers, but on top of that basic frame …, that can be any equipment provider,” assuming the payload is able to fit on the base frames (including through the use of a container, if required), he explained.

“As long as we can put it on The Cube’s base frame system, then we can use any equipment supplier. The end customer decides what is to be put on these frames.”

“What you have seen here is a continuation, and yet a completely new concept,” Rear Admiral Torben Mikkelsen, Executive Director of Navy Programs at Defence Command Denmark, and previously head of the Royal Danish Navy as Admiral Danish Fleet, said at a launch event at Euronaval for The Cube. “The ‘STANFLEX’ modularity concept started more than 30 years ago …. The Cube has brought it much further.”

“Now is the time to bring modularity to a higher level because it makes operational and tactical sense. [The Cube] gives us the necessary tactical flexibility to adapt to the future. We have to be mission-oriented, rather than platform-centred.”

Posted by : Dr Lee Willett
Dr Lee Willett is an independent analyst on defence and security matters, specialising in naval and maritime issues. Based in London, Dr Willett has 25 years’ experience working across the academic, independent, and media sectors: he spent 13 years at the RUSI think-tank, including running the maritime studies programme; and he spent four years at Janes, as editor of Janes Navy International. He has spent time at sea onboard: UK Royal Navy ships and submarines; US Navy aircraft carriers, amphibious platforms, and surface ships; and (having attended several NATO exercises, including ‘BALTOPS’, ‘Cold Response’, and ‘Dynamic Manta’) surface ships and submarines from various NATO allies. He has given evidence to UK parliamentary committees, on topics including sea-based nuclear deterrence, counterpiracy, and maritime surveillance.