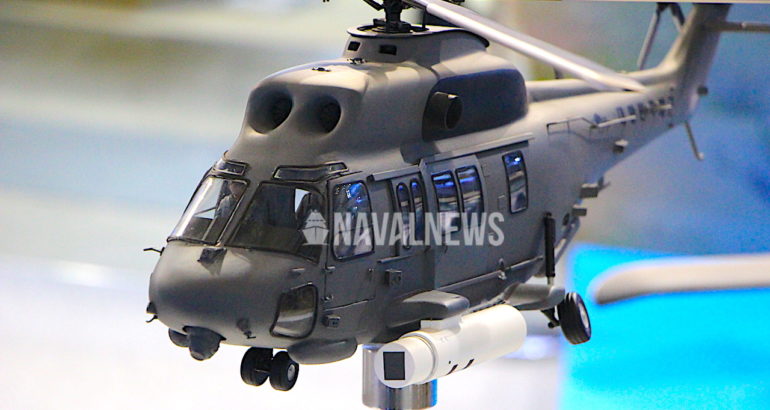 At MADEX 2019 in Busan (South Korea), a new Mine Countermeasures Helicopter (MCH) variant is being pitched by Korean Aerospace Industries (KAI) to answer the ROK Navy requirement for a new airborne countermeasures capability - Naval News.

The ROK Navy issued a requirement for the acquisition of 10 helicopter-based mine countermeasure systems. Besides the KAI MCH proposal, the Lockheed Martin MH-60 and the AgustaWestland AW101 are expecting a formal decision for next year.

The MCH deploys three major systems: the Northrop Grumman Airborne Laser Mine Detection System (ALMDS), an Airborne Mine Neutralization System (AMNS) and an Autonomous Underwater Vehicle (AUV). All three systems is being operated from an integrated mission console.

The AMNS has not yet been selected by KAI, but ECA Group’s K-STER C or Atlas Elektronik’s Seafox would be relevant options, a KAI representative told Naval News.

In addition to the mine countermeasure mission, the MCH helicopter will offer a broader scope of secondary missions thanks to the 3,6 tons payload. It will allow to add a wide array of additional combat support tasks. Among other mission systems, the MCH is equipped with an EO/IR gyrostabilized gimbal and a full digital glass cockpit.The MCH variant keeps the same twin-engine propulsion scheme based on the Hanwha Techwin/General Electric T700/701 K 1,800 Shp turboshaft engine. The MCH rotorcraft has a maximum range of 717 km and an endurance of about 4 h, says KAI.

South Korea’s Ministry of National Defense has more than 220 Surion helicopters on order, among which 130 have been delivered so far, including to the police and ROK Marine forces. Two will be handed over to the ROK Coast Guard.