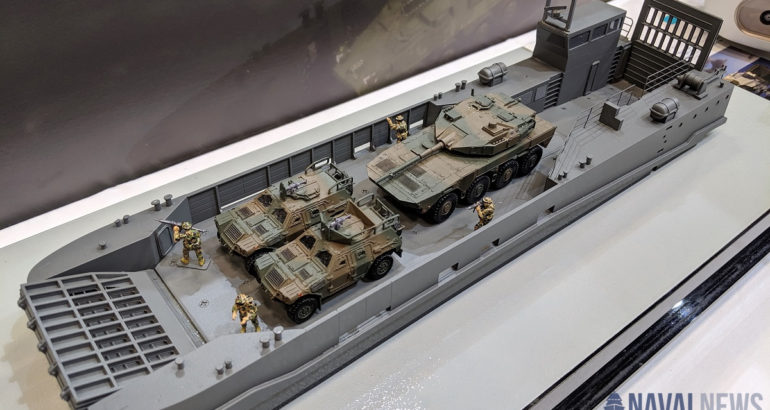 The change in threat environment has required the Japanese MoD to focus on the Southwestern island defense, which led to the recent creation of an Amphibious Rapid Deployment Brigade (ARDB), under the Japan Ground Self-Defense Force (JGSDF) command.

Local media reported in July last year that the JGSDF was considering the procurement of amphibious vessels independent of the Maritime Self-Defense Force (JMSDF). These vessels would be used as shore to shore connectors for troops and equipment to deploy them to the Japan’s southwestern islands in an emergency.

According to BMT, the Caimen-90 was developed in response to the emerging requirement to distance amphibious task forces further away from the beach, as a counter to inshore threats. As this distance increases, so too does the need for faster surface connectors, to enable the all-important offload tempo.

BMT’s landing craft is able to operate at high speeds (22 knots) with heavy payloads (90 tons), allowing faster amphibious offload from a host platform when compared with slower, more conventional landing craft. Caimen-90 benefits from excellent sea-keeping, with less than one knot speed reduction in Sea State 4, promoting consistent effectiveness across a range of operational areas. The 500 nautical miles range and multi-role flexibility of the Caimen-90 allows a wide variety of independent operations for both combat and Humanitarian Assistance/Disaster Relief tasks.

According to local media, the Japanese MoD supports the idea of equipping the JGSDF with landing ship tanks and smaller, more maneuverable ships. However sources at MAST Asia 2019 told Naval News that no requirements have been formally set yet, there is no program yet and therefore no funding for now.

Via its partnership with Mitsui E&S, if selected, the Caimen-90 would be built in country at the Tamano shipyard (Okayama prefecture) which has aluminum construction capabilities. However a similar (BMT) design which recently won a US Army competition (MSVL) could be offered by Vigor (prime contractor for MSVL) as part of a foreign military sale deal. In addition, France’s CNIM is known to be pitching its LCAT landing catamaran in the “shore to shore” configuration. Last but not least, a number of Japanese defense companies are working on their own solutions. Two of which were on display at MAST Asia 2019: Mitsubishi Heavy Industries’s “Amphibious Vehicle” and IHI / JMU’s “Multipurpose Ampihibious Vehicle”.

The JMSDF currently operates three Osumi-class LSTs with a displacement of 14,000 tons. They feature a well deck for amphibious operations. The JMSDF also fields a number of landing craft and LCAC used as ship to shore connectors. Japan also ordered 30 AAV-7s from BAE Systems and has expressed a need for a total of 52 Assault Amphibious Vehicle.

Martin Manaranche 25 Nov 2021
The French armament procurement agency (DGA) took delivery of the 'Arbalette' and 'Arquebuse', the first two new generation landing craft known as EDA-S. They were ordered in 2019 from CNIM for the French Navy and Army.