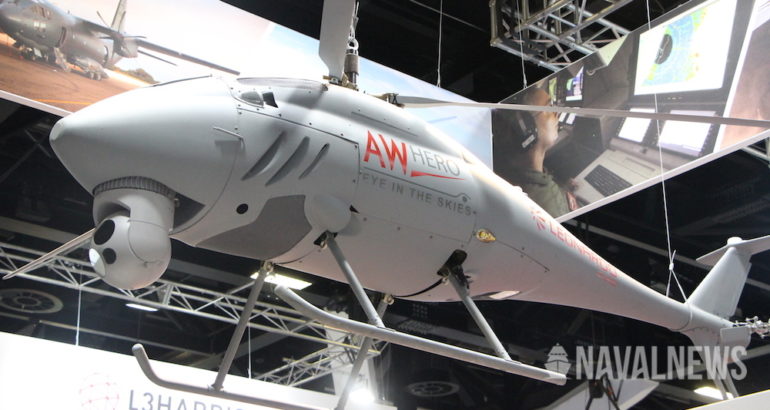 With major upcoming programmes to strengthen its capabilities at sea, Australia has a trusted partner in Leonardo, who is exhibiting at Pacific Expo 2019 in Sydney, displaying the AWHERO unmanned platform.

The AWHERO, which combines Leonardo’s experience in the development of rotary wing platforms and Sistemi Dinamici’s experience in unmanned aircraft, can be used in missions carried out in the field or in naval missions to provide protection and support to the contingent; transport supplies and engage in anti-submarine and anti-piracy operations. It can also perform operations relating to national security; coastal and border patrols; ISTAR (Intelligence, Surveillance, Target Acquisition and Reconnaissance) missions; the detection, identification and monitoring of vessels; the monitoring of critical infrastructure and environmental research and monitoring.

AWHERO is controlled through a Ground Control Station (GCS), with protocols and communication NATO STANAG-4586 compliant, able to manage multiple missions during all stages of flight, with combined or independent assets. The GCS enables mission planning/re-planning, mission management and control of sensor payloads. Data, images and video can be immediately transmitted to the GCS and to final user terminals for decision support.

Two modular payload bays carry sensors including radar (such as the Gabbiano TS Ultra-Light), Electro Optical (EO) / Infra-red (IR) and Light Imaging Detection and Ranging (LiDAR) and advanced communication systems. The payloads can be nose, underbelly or side-mounted. The nose bay can accommodate a 10” EO/IR turret or an 8” EO/IR turret with radar, while the underbelly and side bays can be used for heavier payloads.

In Australia, Leonardo has sites in Melbourne (VIC), Nowra (NSW) and Rockingham (WA). The Western Australian operation plays a key role in Leonardo’s delivery as prime system integrator of the naval communication upgrade programme. The company has a team of more than 100 people working at a System Integration and Test Facility dedicated to the execution, integration and installation of the New Generation Maritime Communication Systems for the Anzac frigate fleet.

The solution includes enhanced external RF communications and internal communications systems, the provision of a high-data-rate-line-of-sight bearers and the introduction of a modern communications management system. Leonardo has been securing Australia’s waters since 1885 when it supplied torpedoes to the navies of the Colonies of Victoria, Tasmania and South Australia and continues today, through Eurotorp, to supply the RAN with torpedoes.