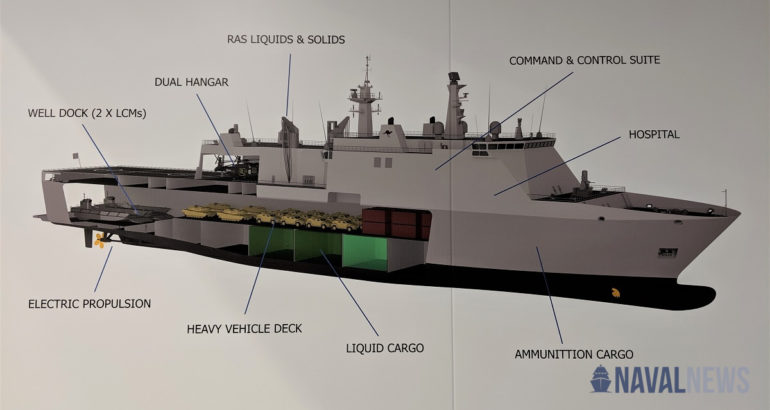 The JSS was fully designed in-house by Navantia Australia’s new design center of excellence based in Melbourne. This facility was opened in 2018 with the aim of increasing the sovereign capability of Navantia Australia.

The JSS was designed with an upcoming need of the Royal Australian Navy in mind, that Navantia Australia expects will come out in late 2020. The Australian need is likely to be for 1 or 2 units. Navantia Australia believes the JSS could answer some needs on the export market as well: For example a shorter version of the ship unveiled at PACIFIC 2019 could answer the Royal Malaysian Navy MRSS (Multi Role Support Ship) requirement.

“That ship is aimed at meeting a new market need, it is a sovereign, Australian, design. It will be fully exportable worldwide from Navantia Australia”

Navantia Australia’s JSS design combines 70% of the load capacity of HMAS Choules LPD and 70% of the fuel capacity of the now decommissioned HMAS Success AOR. The Melbourne-based design team used the Galicia-class LPD as a base and came up with the JSS fulfilling the requirements.

The JSS has a capacity to embark a 300 strong force, up to 500 tons of vehicles, 3600 tons marine diesel capacity, 600 tons of aviation fuel and 400 tons of fresh water. The flight deck and hangar can accommodate 2 NH90 type helicopters. The well deck can launch and recover two LLCs. Navantia Australia is hopeful to keep the crew size below 160 sailors. The JSS comes with full medical facilities (dental, X-ray, operating rooms, critical unit intensive care ward etc…)

The CGI unveiled by Navantia Australia at PACIFIC 2019 featured two PHALANX CIWS, decoy launchers, a multifunction radar and two fueling stations (one port, one starboard side).