At the Sea Air Space show which took place earlier this month, Austal was for the first time showcasing a scale model of its expeditionary medical ship (EMS).

Austal’s EMS project is not a program of record yet but is a clean sheet design based on the existing expeditionary fast transport (EPF) design. The EMS however is larger and features a redesigned hull form to give it better sea keeping in higher sea states.

“We took the best of the EPF concept such as high speed and shallow draft and put it into bigger platform […] It is a hospital ship that takes all the capabilities of the current T-AH USS Comfort and USS Mercy in a smaller package. So, you don’t have the same capacity but you have the same capabilities in a much more responsive and agile platform.”

The EMS design predated the COVID-19 pandemic, but the project picked up steam in the summer of 2020 to update the design based on lessons learned at the peak of the crisis.

“We hope it becomes a program design, we think it is a great solution for the U.S. Navy. It is an economical solution as USNS Mercy and USNS Comfort’s service life come to an end. It is cheaper than replacing one for one with the current hospital ships.”

Austal runned some numbers from “the industry perspective” to get an idea of how many ships the U.S. Navy would require. It resulted in a fleet of six to eight units distributed globally, which “would give the ability to mass three medical ships within 72 hours in just any area of interest” said Mr Ryder.

“I don’t think it makes sense to have one big thousand bed facility rather than two or three ships spread out really supporting the forces.”

At this stage, Austal told Naval News, they are currently undertaking discussions with the U.S. Navy for this program.

According to the specifications released during Sea Air Space 2021, the current EMS design is a 118 meters-long catamaran with a beam of 30 meters and a draft of 4.5 meters. The Austal’s hospital ship can sail over 2,000 nautical miles at a cruise speed of 18 knots and can reach a top speed of 27 knots. It features a helicopter deck large enough to accommodate one V-22 Osprey, a CH-53 Sea Stallion or a Sikorsky H-60. The ship has a total of 185 berthing including the crew, medical and aviation personnel.

Regarding its medical facilities, the EMS would have 124 medical beds in total including four operating rooms, 8 isolation beds, 32 light care beds and 80 ER, ACW, ICU and recovery beds.

Our interview with Austal USA during Sea Air Space on the EMS:

Naval News Staff 23 Dec 2021
The U.S. Navy took delivery of the future USS Canberra (LCS 30) at Austal USA on December 21. This is the second Independence-variant Littoral Combat Ship (LCS) Austal has delivered to the Navy in 2021. 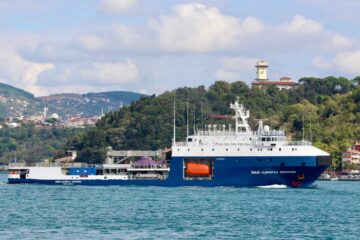 Naval News Staff 24 Nov 2021
Austal USA has been awarded a US$72.5 million (~A$100.4 million) contract by the US Navy to perform maintenance on Littoral Combat Ships (LCS) deployed to the Western Pacific, Indian Ocean, and the countries and ports therein.