An industry team led by Serco is continuing to progress detail design of a highly autonomous experimental uncrewed surface craft ahead of beginning prototype construction later this year.

The Defense Advanced Research Projects Agency (DARPA) No Manning Required Ship (NOMARS) program has been conceived to build and test an uncrewed X-ship demonstrator designed to operate autonomously for extended periods without any human intervention or underway maintenance. Serco was last year selected to deliver Phase 2 of NOMARS ahead of a rival Gibbs & Cox team following completion of Phase 1B preliminary design activities.

Launched by DARPA’s Tactical Technology Office in 2020, NOMARS has been established to build and demonstrate a medium unmanned surface vessel (MUSV) that can go to sea and perform missions with unprecedented reliability and availability, while also carrying a significant payload. The intention is that the NOMARS vessel and sub-systems should be able to operate for missions lasting many months at a time with no manned interventions between yearly maintenance cycles.

According to DARPA, the program seeks to challenge the traditional naval architecture model by designing a ‘clean-sheet’ seaframe “with no provision, allowance, or expectation for humans at sea”.

“By removing the human element from all ship design considerations, the program intends to demonstrate significant advantages, to include size, cost, at-sea reliability, survivability to sea-state, and survivability to adversary actions such as stealth considerations and resistance to tampering. The program also will strive for greater hydrodynamic efficiency via hull optimization without requirements for crew safety or comfort.”

Serco’s Phase 2 contract, worth up to $68.5 million if all options are exercised, was announced by DARPA in August 2022. The company’s NOMARS solution, named Defiant, is a 210-tonne MUSV-class design: renders released by DARPA and Serco show Defiant to be a slender monohull with a prominent arch-mast structure amidships. The design will integrate distributed hybrid power generation, podded propulsors, and high-capacity batteries.

The Serco team is led by the company’s Marine Engineering Operations division, which brings resident naval architecture and marine engineering expertise from the acquisition of the Naval Systems Business Unit of Alion Science and Technology Corporation in 2019. This same business has its heritage in John J. McMullen and Associates (JJMA), which was acquired by Alion in 2005.

MUSVs are being considered by the US Navy as long-range ISR platforms to extending the ‘sensor horizon’ of larger manned combatants into contested or high-threat areas without risking the lives of crews. The NOMARS Defiant platform has been designed to drastically decrease the navy’s cost per mission hour with a reduced platform size, lower maintenance costs, and extended time on station.

The Defiant design was developed by Serco using a proprietary Design Space Exploration (DSX) toolset that enabled the company to evaluate spaces with a variety of parameters, and output multiple of ship designs to meet a diverse set of performance objectives and constraints. Serco used the DSX tool to iterate a series of ship designs, subsequently refining these to finalise its Defiant concept.

To achieve the very high levels of reliability demanded by the NOMARS program, Serco has adopted a philosophy of graceful degradation in order that there is sufficient system-level redundancy to tolerate system casualties over time and still meet full system requirements. For example, the major system components of the Defiant design are modularised, so repairs can be conducted with equipment typically found in yacht yards worldwide. This maintenance philosophy also supports a rapid turnaround. NOMARS Phase 2 is planned to culminate with a final three-month at-sea demonstration event, currently planned for late 2024/early 2025. It is anticipated that the Defiant X-ship demonstrator will subsequently join other MUSVs under evaluation by the US Navy for fleet operations. 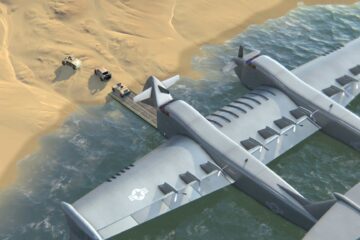