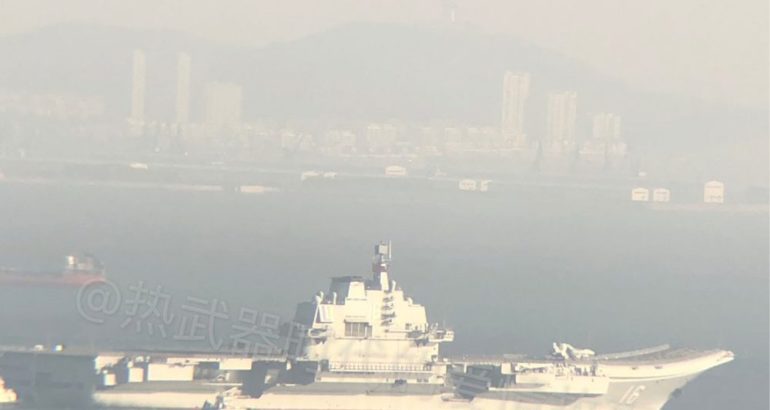 China’s Liaoning aircraft carrier returned at sea for trials on Monday following a period of maintenance and modification which lasted over six months, our colleagues from East Pendulum reported yesterday.

Based on photos posted on Sina Weibo on Monday, the Liaoning aircraft carrier seems to have set sail from the Dalian Shipyard in Northeast China’s Liaoning Province with the assistance of tug boats on Monday morning.

The vessel’s alleged movement coincides with a notice of a military exercise released by the Maritime Safety Administration of China on Thursday. The exercise is scheduled from Monday to January 28 in North Huanghai Sea near Dalian, and other ships are prohibited from entering a designated area.

The Liaoning began its refit period in the Dalian Shipyard in July 2018 after some six years of service in the People’s Liberation Army Navy (PLAN or Chinese Navy) , Beijing-based newspaper Science and Technology Daily reported

The carrier is expected to participate in a possible naval parade in celebration of the 70th anniversary of the PLAN in April.

In addition to maintaining the Liaoning’s capability, photos show modifications were made to the ship’s superstructure.

Details regarding this potentially major refit were not communicated either by the PLAN, nor the Chinese shipyards, but amateur pictures and satellite images have at least shown that the existing aviation bridge was replaced with a newer design, and the flight deck has also been completely stripped and refurbished.

It should be noted that shortly after the Liaoning started its mid-life refit, the Chinese Ministry of Defense indicated in a weekly press conference that the PLAN carrier group reached a certain maturity and has now passed its initial operational capability (IOC).

The experiences gained during the first six years of deployment of the Liaoning will undoubtedly serve the Chinese Navy to design future aircraft carriers. Apart from the second carrier, which has recently completed its 5th test at sea and is expected to be commissioned this year, fabrication on the third aircraft carrier is about to start, in the third quarter of 2019. This carrier is rumored to be a CATOBAR (Catapult Assisted Take-Off But Arrested Recovery) design equipped with electromagnetic catapults.