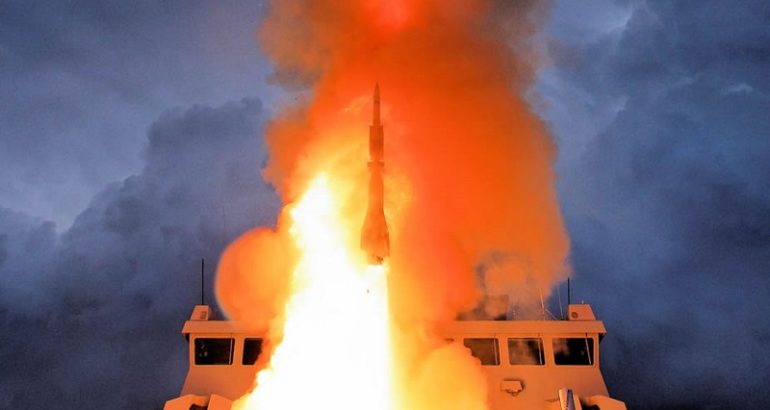 OCCAR announced positive completion of the System Preliminary Design Review (PDR) for SAMP/T B1 NT, a key milestone to freeze the technical specification of a number of the elements of SAMP/T including the Firing Control Unit (FCU), Ground launcher system and new Aster B1NT munition.  As a system of systems, the PDRs for the Aster 30 B1NT (already started), launcher and FCU will follow up to spring 2019. SAMP/T B1NT is intended to increase the capabilities of the system and prepare the mid-life upgrade of French and Italian SAMP/T sections.

Other programme milestones reported by OCCAR include:
– Launch of the development and qualification of a new generation of telemetry kit, a package of work that will allow the French Forces to sustain their capacity to live fire Aster munitions under exercise conditions from both naval and ground FSAF/PAAMS systems until the 2030s. A contract amendment for Italy to join the work package is anticipated in 2019 with the procurement of the first new telemetry kits to begin in 2020

– Commencement of the development of a Joint Range Extension Application Protocol (JREAP) that will provide a new capability to the French Air Force by connecting a SAMP/T platoon to an operative network using JREAP-C protocol. This capability will improve the interoperability with NATO and include InfoSec solutions.

While the Aster 30 B1NT milestone relates to the land-based SAMP/T systems (of the French and Italian Army), the missile is set to eventually be deployed about air defense destroyers of the UK (Type 45), France and Italy (Horizon class). Studies for the integration of Aster 30 B1NT missiles aboard the Forbin-class (to provide them with Ballistic Missile Defence BMD capability) are provisioned in the 2019-2025 French military planning law.
The Italian Navy is set to get this capability in 2024 with the delivery of its first PPA (Pattugliatore Polivalente d’Altura or Offshore Multipurpose Patrol Ship) vessel in the “Full” configuration.

The new missile will be capable of intercepting threats of the entry of the MRBM (Medium Range Ballistic Missiles) domain whereas the current Aster 30 Block 1 deals with SRBM (Short Range Ballistic Missiles) of up to 600 km range and it will also be capable of dealing with missiles with separable warheads. This new version of Aster will extend the antiballistic capability of the missile from a range of 600km up to 1,500km. On December 20, OCCAR (Organisation for Joint Armament Cooperation) notified to EUROSAM, a consortium formed by MBDA and Thales, the amendment 1 of the contract for the “B1NT” programme. This amendment embodies the participation of Italy in the programme. It follows the notification of the initial contract under French mandate on December 23, 2015, and the Arrangement of Cooperation, signed in June 2016 by the French and Italian Defence Ministers, laying down the framework of responsibilities and rights of the two countries vis-a-vis the missile to be developed in cooperation, and its multiple applications in land and naval defence systems against air attacks and ballistic missiles.

Launched in 1988 by France and Italy, the Aster family (also known as FSAF – Future Surface-to-Air Family) exists as a ground based air and missile defence system (SAMP/T) in service with the Italian Army and the French Air Force. It is also deployed in its naval versions for the self defence of the French and Italian Navies aircraft carriers and provides the self, local and fleet area defence capability on British, French and Italian frigates and destroyers. The UK, which deploys Aster missiles on its Type 45 destroyers, declared during the Franco-British summit held in Amiens in March 2016, that it is considering the new Block 1 NT version for this class of ships.