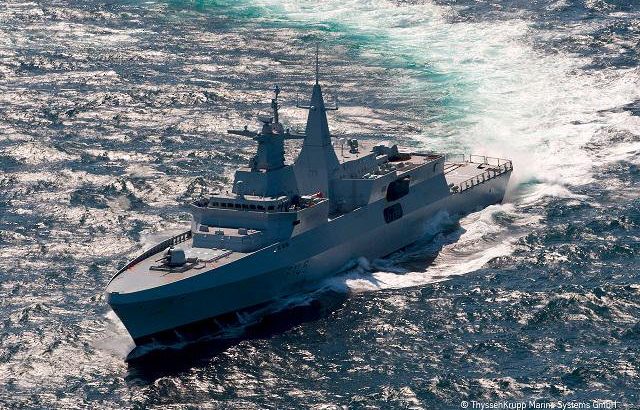 The MEKO A-200 has been selected by the South African Navy (pictured here) and the Algerian Navy. TKMS picture.

As part of the tender process for the introduction of the new Type 31e frigate generation, thyssenkrupp Marine Systems is one of the selected suppliers in the final design and offer phase in a consortium led by ATLAS ELEKTRONIK UK including ATLAS ELEKTRONIK GmbH and with British shipyards Harland & Wolff and Ferguson Marine Engineering. This was announced by the Royal Navy in London in December 2018.

Dr. Rolf Wirtz, CEO of thyssenkrupp Marine Systems: “We are proud to have reached the decisive design phase for the Type 31e frigates. Based on our proven MEKO A-200 ships, we will offer the Royal Navy a multi-purpose frigate based on our many years of experience in developing high performance, modular naval vessels. The proposed ship design is already in operation with two navies and is unique in its comprehensive modularity and expandability.”

With the support of thyssenkrupp Marine Systems, the ships will be manufactured by Harland & Wolff in Belfast and Ferguson Marine Engineering in Glasgow – the highest added value at the sites mentioned and in the entire local supply industry is guaranteed.

The Type 31e program is considered one of the most important in the Royal Navy’s comprehensive future capabilities program. The MOD want the first ship delivered in 2023.

The MEKO A-200 has been selected by the South African Navy (four Valour-class frigates between 2000 and 2005) and the Algerian Navy (two El Radii-class frigates). The design was also being pitched last year to the U.S. Navy for the FFG(X) competition, but didn’t pass the down select phase.

The UK government announced on 10 December 2018 that three groups were down selected for the competitive design phase: