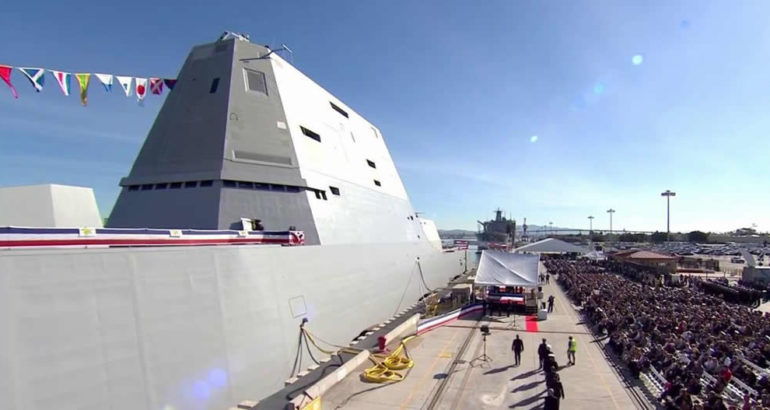 DDG-1001 is the second ship in the Zumwalt-class of destroyers. It honors Petty Officer 2nd Class Michael Monsoor, a Navy SEAL who was posthumously awarded the Medal of Honor for his heroic actions in Ramadi, Iraq, Sept. 29, 2006. At the ship’s 2008 naming ceremony, former Secretary of the Navy Donald C. Winter recognized Monsoor as “a consummate professional who faced terrorist enemies with aplomb and stoicism.”

“When you man the rails today and you man your first watch stations at [general quarters], you bring this ship to life in the spirit and legacy of Michael Monsoor with toughness, courage and love, and you will be the defenders,” said Vice Adm. Timothy Szymanski, deputy commander of U.S. Special Operations Command. “You will defend. Stay in the Fight.”

“Monsoor is an incredible honor that the Navy has bestowed upon him and his family,” said Chief Warrant Officer Benjamin Oleson, one of Monsoor’s teammates in Ramadi. “I went out to the christening event, and I was completely blown away [by] the sheer size of what this ship represents. I think if Mikey saw the ship, he’d be like, ‘That’s too much. That’s not for me. I’m just laid back.’ But I think it’s truly an honor that the Navy did this, especially the type of destroyer that it is. … [with] its cutting-edge, advanced technology. I think, with Mikey in the platoon, always at the front, leading the way, the way the ship is designed, it’s going to be leading the way in the future.”

The nearly 16,000-ton Michael Monsoor was built by General Dynamics Bath Iron Works in Bath, Maine. The ship is 190 meters in length, has a beam of 24.6 meters, and a navigational draft of 8.4 meters. The ship is powered by two Rolls-Royce main turbine generators, two Rolls-Royce auxiliary turbine generators, two 34.6 MW advanced induction motors to speeds up to 30-plus knots.

The future USS Michael Monsoor includes new technologies and will serve as a multi-mission platform capable of operating as an integral part of naval, joint or combined maritime forces. The Zumwalt-class fields a considerably larger flight deck and has capacity for two MH-60R and three VTOL UAVs to execute a wider array of surface, aviation, and undersea missions that deliver more manpower, firepower, and computing power to the fight. The future USS Michael Monsoor’s Vertical Launch System (VLS) features cells physically larger than similar cells on today’s ships, allowing this class to fire larger and more advanced land and anti-ship missiles in the future.

USS Michael Monsoor will be homeported at Naval Base San Diego, California.