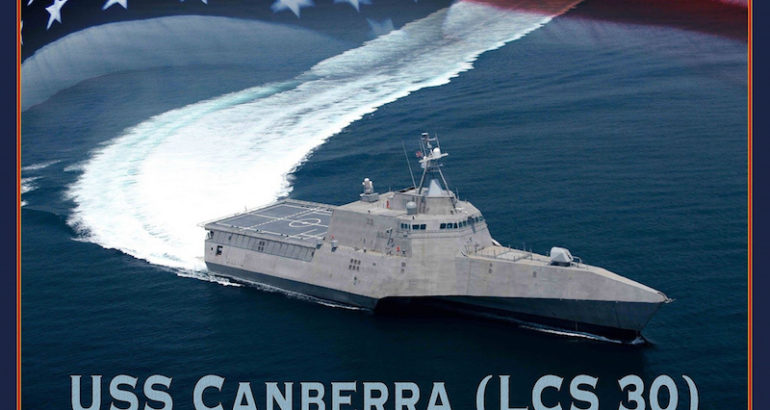 Construction on the future USS Canberra (LCS 30) began on Feb. 22 in Austal USA's module manufacturing facility. Dave Growden, native Australian, LCS Program Director and a 30-year member of Austal USA's team, had the honor of pushing the button to start the router that cut the first piece of aluminum, signalling start of construction for the 15th Independence-variant littoral combat ship.

LCS 30 will be the second U.S. Navy vessel to bear the name USS Canberra in honor of Australia’s capital city. In 1943, the first USS Canberra joined the U.S. Navy, serving with distinction in the Pacific in World War II, the Cuban Missile Crisis blockade and the Vietnam War.

“It’s a privilege to be building a U.S. Navy combat ship named for the capital of Australia, the birthplace of Austal USA’s parent organization,” said Austal USA President Craig Perciavalle. “The Independence-variant LCS will play a prominent role in the safety and security of the Pacific as our ships deploy forward this year and for years to come.”

Austal USA has delivered nine littoral combat ships to the U.S. Navy, while six are currently under construction (LCS 20-30) and four are awaiting the start of construction following LCS 30.

LCS is a highly maneuverable, lethal and adaptable ship designed to support focused mine countermeasures, anti-submarine warfare and surface warfare missions.  The ship integrates new technology and capability to affordably support current and future mission capability from deep water to the littorals.

As the role of the littoral combat ship continues to evolve as a key component to the Navy’s ability to gain sea control through distributed lethality, Austal USA continues to deliver ships on time and on budget to support the needs of the fleet. The Independence-variant LCS, along with Austal USA’s highly successful Expeditionary Fast Transport (EPF), are designed, constructed and well positioned to meet the needs of the fleet today and into the future. The flexibility and capacity of the Austal USA shipyard, the Independence-variant LCS and the EPF are well suited to rapidly and efficiently support the Navy’s desired fleet of 355 ships with affordable solutions.