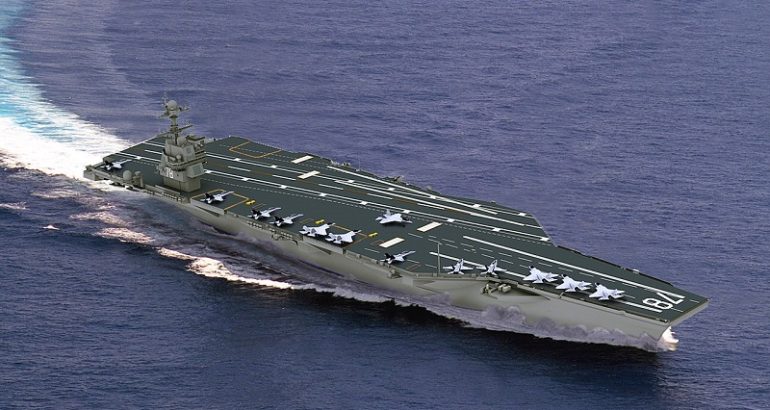 The U.S. Navy has awarded a contract for the construction of CVN 80 and CVN 81 to Huntington Ingalls Industries (HII) Newport News Shipbuilding.

It is the first time in more than three decades that HII Newport News Shipbuilding division is awarded a multi-ship contract from the U.S. Navy to build two aircraft carriers. The contract modification is valued at $15.2 billion for the detail design and construction of the Gerald R. Ford-class aircraft carriers Enterprise (CVN 80) and CVN 81, which is yet to be been named.

This contract award delivers significant savings to the U.S. government – exceeding $4 billion when compared to the Navy’s original cost estimates to procure these CVNs separately.

“Today marks a great team effort to drive out cost and maximize efficiency in government procurement,” said Secretary of the Navy Richard V. Spencer. “Focusing on optimizing construction activities and material procurement, the team was able to achieve significant savings as compared to individual procurement contracts. One contract for construction of the two ships will enable the shipbuilder flexibility to best employ its skilled workforce to design once and build twice for unprecedented labor reductions while providing stability and opportunities for further efficiencies within the nuclear industrial base.”

In addition to these savings, the contract includes ship integration costs of several modifications required to meet emerging threats including the F-35C Lightning II, MK 38 gun system and MQ-25 Stingray Unmanned Aircraft System. These modifications increase the lethality of the FORD Class, and represent an additional $100 million in savings that is in addition to the $4 billion, since these new capabilities were not included in the original single-CVN Navy estimate. Plus, these new savings associated with new capabilities increases to $200 million if installed in the ship before delivery, in comparison to installing after ship delivery.

This Fixed Price Incentive (Firm Target) (FPIF) contract limits the Navy’s liability and incentivizes the shipyard’s best performance. The contract guarantees a single technical baseline for both ships, which allows the shipyard to re-use engineering rollover products, minimize changes between the two ships and leverage economic order quantities for equipment and material procurement.