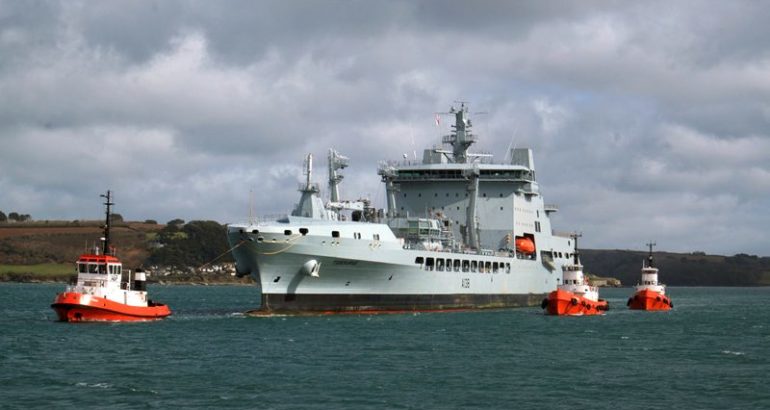 The RFA Tidesurge, the third of the Royal Fleet Auxiliary's mew Tide-class tankers to be made (Credit: UK MoD/Crown Copyright)

Royal Navy Tidesurge tanker has been welcomed to the fleet today with a dedication service at Greenock’s Ocean Terminal, the service announced on Feb. 20, 2019. The tanker is the latest of four new Royal Fleet Auxiliary ships acquired under the 450M£ (US$588M) MARS Tanker programme.

« The Tide class is a truly world-leading fleet of new supply vessels which has already been proven in operational deployments, including those alongside HMS Queen Elizabeth, » said David Farmer, from the UK Defence Equipment and Support (DE&S).

“Royal Fleet Auxiliary Tidesurge is the third of our four new fleet replenishment tankers,” stated the Commodore Duncan Lamb, Head of the RFA.

“With her flight deck capable of operating Chinook helicopters, double probe replenishment at sea rigs, self-defence capability, and versatile fuel cargo system, she represents a crucial element of the Royal Navy task group of the future and a key enabler of our navy’s global reach.”

RFA Tidesurge is the third of class of the Military Afloat Reach & Sustainability (MARS) Tankers, which includes in-service sister ships RFA Tidespring and Tiderace. RFA Tideforce which will become operational later this year.

Once in service, Tidesurge will also provide fuel and water for Royal Navy warships all around the world. The delivery of these new ships is part of the UK Government’s £179Bn (US$234Bn) plan to provide the British Armed Forces with the equipment they need to deliver effective operational support across the globe.

In addition to their supply duties in support of the Royal Navy, the vessels will also be able to undertake a wide range of maritime operations, such as constabulary patrols policing shipping lanes, humanitarian relief, as well as providing support to NATO and coalition allies.

The MARS Tanker programme has an extensive domestic supply chain involving around 27 UK companies. Prior to entry into operational service, RFA Tidesurge has undergone a detailed customisation programme at the A&P ship repair yard in Falmouth.