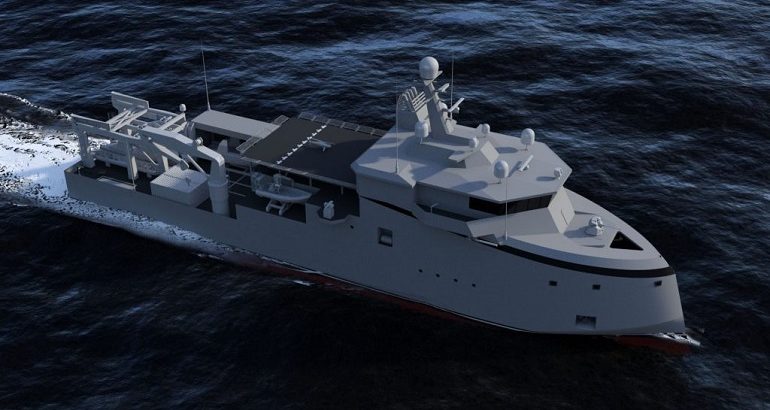 The proposed mother ship is 92 meters long, with a displacement of 3,500 tons. Sea Naval Solutions image.

As the Belgian-Dutch MCM tender is heating up, the Sea Naval Solutions (SNS) consortium (Thales-Engine Deck Repair-Chantier de l’Atlantique-Socarenam) invited Naval News in Antwerp to detail its proposal and to outline the capabilities of EDR shipyard.

With a 50 years long history in Belgium, EDR and Thales Belgium are now actively promoting the SNS offer for the MCM program.

SNS has decided to locate the bulk of its industrial activities in Belgium: the platforms will be partly built and then fully equipped by EDR, the combat systems and the counter-mining system will be integrated by Thales in Belgium. Finally, maintenance will be carried out in Zeebrugge, Antwerp, Ostend and Tubize.

Through these transfers of knowledge and technologies, SNS guarantees returns worth 2.3 billion Euro (US$2.61Bn) over a period of 20 years, shared at 70% in Flanders and 30% in Brussels and Wallonia. The MCM program will enable SNS to carry out 82 projects, involving some fifty companies (78% of which are SMEs), academies and research centers. Will have a positive impact on more than 500 jobs throughout Belgium.

“These projects with high technological value in the naval field will allow Belgium to rebuild a shipbuilding capacity in Antwerp, and develop new centers of expertise in artificial intelligence, simulation and cyber security”, said SNS.

The first mother ship is to be delivered in 2023, a rythtm that will rise to two ships per year starting 2024. « It will take us 18 months and 130 persons to build a sole mothership », stated SNS. Based on a Chantier de l’Atlantique concept called “Deviceseas” launched during Euronaval 2016, the proposed mother ship is 92 meters long, with a displacement of 3,500 tons. With a complement of 63 sailors, the vessel will carry two surface drones (USV) and up to 8 autonomous underwater systems (AUV and ROV) housed in a dedicated compartment. Close-in protection capability would be provided by a sole Sea deFNder RCWS, a maritime variant of the deFNder Medium turret. It can integrate all FN Herstal machine guns up to .50 caliber, including the FN M3R with high firing rate of 1,100 RPM.

Originally developed for the offshore market, the Launch and recovery system (LARS) is capable of launching and recovering a wide range of vessels with or without crew in sea state 5, on or under water and up to a mass of 20 tonnes.

The systems proposed for the toolbox are based on solutions developed and tested in operational conditions. The subsystems and their evolution have been validated and demonstrated at sea as part of evaluation campaigns in Singapore, France or Japan. They were also part of official demonstrations during UW16, TTCP, North Sea Unmanned Trials 16 and 17, ANTX, etc. The heart of the toolbox has already been validated at sea through the Franco-British MMCM (Maritime Mine Counter Measures) program.

The SNS toolbox offer is to include Thales’ T-SAS towed sonar, as well as the M-AUV. Both will be launched from the French company’s Halcyon USV, whom the composite hull will be party produced in Wallonia by Sobelcomp.

Besides Thales’ solutions, SNS proposal relies on Saab’s know-how to complete its toolbox. According the consortium, the Saab Multi-Shot Mine Neutralisation System (MuMNS) ROV has been selected for disposal missions while the UMS Skeldar (Saab-UMS Aero Group AG) V-200 VTOL UAV should become the preferred UAV platform.