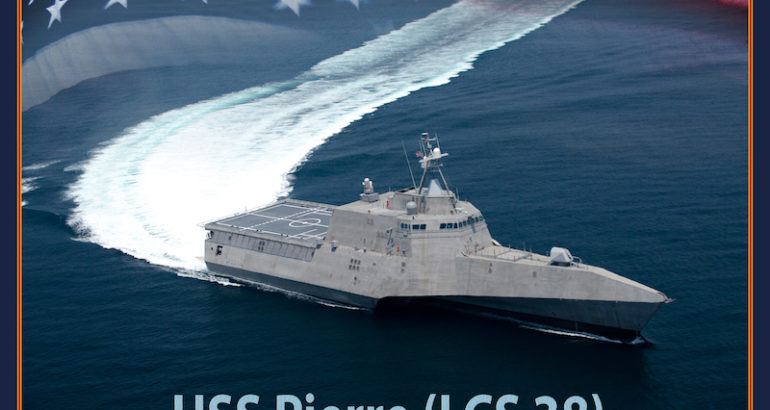 The Secretary of the US Navy has named littoral combat ships 36 and 38, Austal USA said on February 5. LCS 36 is the USS Kingsville after Kingsville, Texas, and LCS 38 is USS Pierre after the capitol city of South Dakota.

The names were revealed this week by the U.S. Navy. The two ships will be built at Austal USA’s state of the art manufacturing facility in Mobile, Ala. with start of construction scheduled for 2020/2021. These ships will be 419 foot-long, with a beam length of 104 feet and capable of operating at speeds in excess of 40 knots.

With five INDY variant littoral combat ships currently under construction and a sixth, LCS 30, set to begin construction later this month, the future USS Kingsville (LCS 36) and USS Pierre (LCS 38) are the 18th and 19th LCS to be built at Austal USA’s facility in Mobile.

In 2004, the U.S. Navy awarded a final design contract for the Littoral Combat Ship (LCS) to Bath Iron Works. Austal designed the seaframe and built the 418 foot aluminum trimaran ship. The first order for a prototype was awarded to the BIW and Austal LCS team in October 2005 and a contract for a second BIW and Austal LCS was awarded by the Navy in May 2009. Both the USS Independence (LCS 2) and the USS Coronado (LCS 4) were delivered to the Navy and are homeported in San Diego, Calif.

In December 2010, Austal, now as prime contractor, received a Navy contract worth over $3.5 billion for construction of up to 10 more LCSs. The first ship in the 10-ship block buy, the USS Jackson (LCS 6) was delivered to the Navy in August 2015.  Since then, the Navy has awarded Austal several additional LCS contracts increasing the Navy’s total buy to 15 Independence-variant ships.