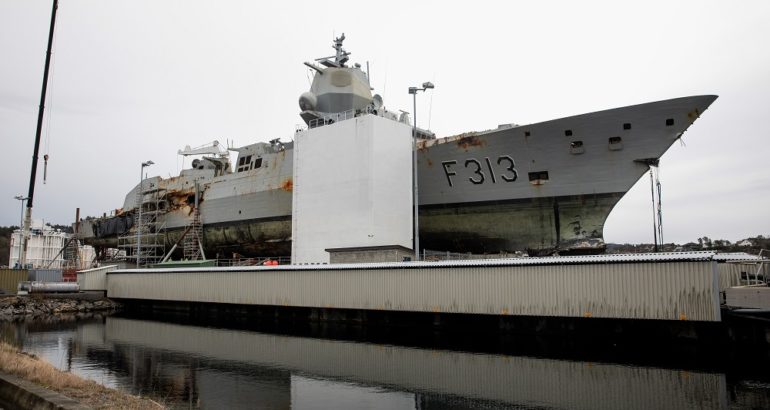 Norwegian Frigate 'Helge Ingstad' is now out of the water at Haakonsvern Naval Base. Norwegian Navy picture.

Crews have completed the raising and salvage of the Royal Norwegian Navy (Sjøforsvaret) frigate HNoMS Helge Ingstad four months after its collision and sinking. With the vessel back in port, and out of the water, the Norwegian Navy said that a lot of work remains.

HNoMS Helge Ingstad was involved in a collision with the oil tanker Sola TS in Norwegian waters around 04:00 in the morning on Thursday 8 November 2018. The accident happened while sailing inner fjords for navigation training.

The salvage was carried out by Scaldis Salvage & Marine Contractors NV, the Belgian subsidiary of Jan De Nul Group, Herbosch-Kiere and DEME, in cooperation with BOA Offshore. The operation was completed last Sunday.
The frigate was raised onto a sub-surface barge, which then raised it to the surface. Aboard the barge, HNoMS “Helge Ingstad” was shipped to Haakonsvern Naval Base.

“Our focus now is to save as much equipment as possible. We have already taken out a lot of values, and so far we have got 1400 different components from a list of 2500 components”

According to the Norwegian Navy, the last weapons and ammunition will be taken off board. Only then, the vessel will be thoroughly check to get an overview of the structure and state of the ship. Steel plates have been ordered to seal the hull.

“Then we can get an assessment of the condition of the vessel, something that gives us a good basis for deciding the wider fate of KNM “Helge Ingstad”. The goal once the hull is sealed is to bring the ship down back in the water and to have it afloat within 5-6 weeks”.

In the meantime, “Helge Ingstad”‘s has been affected to sistership “Otto Sverdrup”. With double crewing, this frigate can sail continuously, and the Norwegian Navy can thus maintain just as much sailing time and availability as if “Helge Ingstad” was still operational.