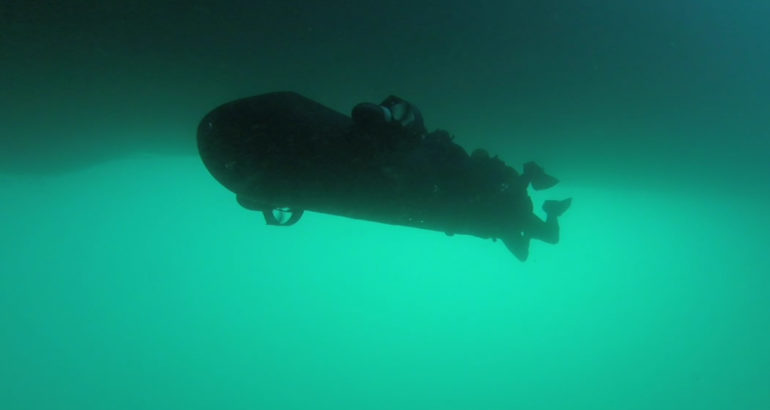 Remi Lecomte, sales manager – special forces, told us that the sea trials campaign was successfuly completed in February. A former combat diver himself, he conducted 30 diving with the Murene, in various conditions and configurations. Lecomte explain that these initial trials helped to “optimize the onboard sensors and propulsion system”.

Since its public launch at Euronaval 2018 in October, Alseamar worked on the weight distribution and the Murene is now buoyancy neutral. The software has been improved as well.

Lecomte explains that the Murene was designed to be as user friendly as possible. “Many people already contacted us to test the Murene and we are discussing with many potential customers”.

According to Alseamr, the Murene SLV is the latest generation of diver propulsion device. It has been designed to provide the best ergonomics, protection and performances for 2 combat divers fully equipped. Murene can be deployed from shore, from a rigid inflatable boat or from a submarine through a torpedo tube (NATO Std 21”) thanks to its retractable thrusters. The Murene is fitted with an Inertial Navigation System coupled to a Doppler Velocity Log and a GPS. Its small dimension, its greater ease of use, and intuitive piloting, make it a perfect device to sneak up on maritime targets. The full version, fitted with a Forward Looking Multi-Beam Sonar, is able to carry out seabed monitoring before an amphibious operation. Designed on the basis of a strong cooperation with combat divers, it is fully built and patented by ALSEAMAR.

The Murene has a maximum speed of 4 knots, a range of 16 nautical miles at 2 knots and weights just under 135 kg.

SeaExplorer glider proves its worth during NATO exercises

Naval News Staff 13 Oct 2022
A fleet of SeaExplorer underwater gliders were deployed off the Portuguese coast to carry out REA (Rapid Environmental Assessment) and ACOUSTINT (Acoustic Intelligence) missions in a complex environment.

Naval News Staff 20 Apr 2022
A submarine is known to be the most complex system to be designed and built. The radiocommunication antenna system is part of this complexity.