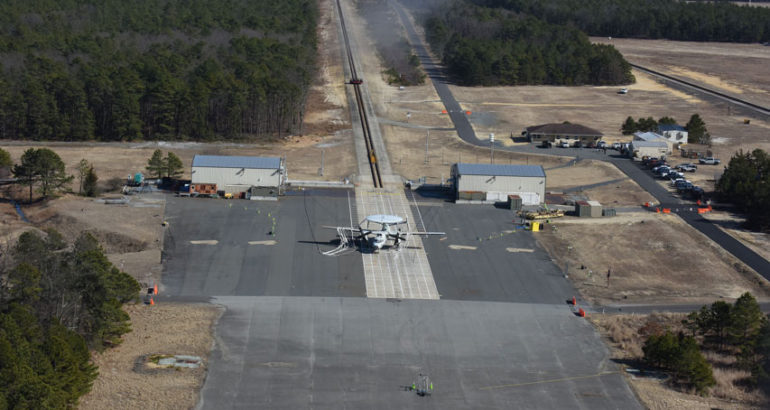 The event marks a critical testing milestone in qualifying the AAG system for barricade use on board Ford-class aircraft carriers. This is the first such test event performed by NAVAIR in more than 20 years.

“An E-2C+ Hawkeye aircraft weighing approximately 46,500 pounds was accelerated to a representative arresting speed into the barricade, where the net attached to the AAG via stanchions caught the aircraft and brought it safely to a stop,” stated Scott Forney, president of GA-EMS. “We are extremely pleased that AAG performed as planned in the first attempt. This is significant particularly since this is the first time in 23 years a barricade test event like this has even occurred.”

“While barricades are rarely used in naval aviation, they remain a critical safety mechanism to arrest aircraft in an emergency situation,” stated Rolf Ziesing, vice president of Programs at GA-EMS. “The AAG system recently completed a series of roll-in and fly-in arrestments for both prop and jet aircraft at the Lakehurst site. This latest test verified the system’s emergency barricade arrestment capabilities when standard aircraft recovery cannot be executed.”

Barricade systems are installed on all American aircraft carriers for use only when required. While no at-sea barricade testing of aircraft using the AAG system is planned, ship personnel routinely practice rigging barricades for emergency situations as part of their normal training and operations procedures.

About AAG
AAG is a turbo-electric system designed for controlled and reliable deceleration of aircraft. AAG is installed on board Gerald R. Ford (CVN 78) along with the GA-EMS Electromagnetic Aircraft Launch System (EMALS), which uses electromagnetic technology to launch aircraft from the deck of naval aircraft carriers. Both systems have been successfully tested during at-sea periods on CVN 78, and are currently in production for the future John F. Kennedy (CVN 79) and Enterprise (CVN 80).