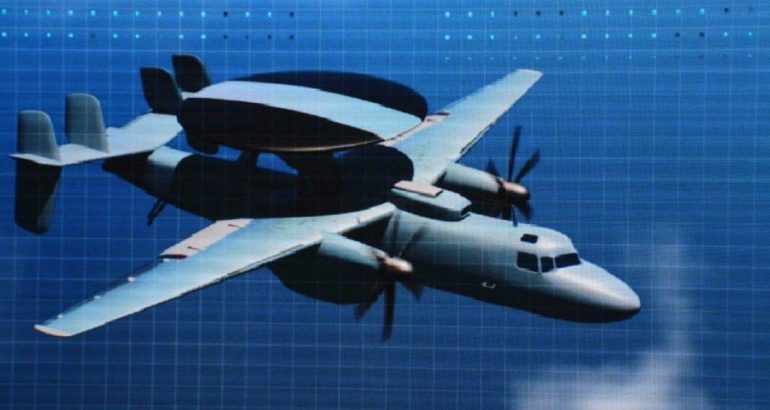 While the large blocks of China’s 3rd aircraft carrier come out one after the other at Shanghai’s Jiangnan Changxing shipyard, for a keel laying sometime in 2019 according to our estimate, another major amplifier component of the Chinese naval aviation should also leave the assembly line and conduct its first flight soon: The carrier-based AWACS, able to take off from the flight deck using a catapult and tasked with the surveillance of the sky and the surface around the carrier strike group.

If this carrier-based AWACS project remains sensitive and has never appeared in any public document (or at least was never mentioned directly by name), we know that Chinese institutions have been working on the various technical subjects linked to this aircraft non-stop since the early 2000s. After the first concrete signs of the progress of the project in 2016 (see our “The Future of Chinese Carrier-Based AWACS is Emerging” and “One more step towards a Chinese embedded AWACS”), we recently learned that the 603 Xi Institute conducted the first full-scale drop test of a “carrier-based aircraft” in December 2018.

A text published on April 2 2019, on the WeChat account of this AVIC consulting firm, specializing in the design of transport and bomber aircraft, did not specify that this test was for a carrier-based AWACS (unsurprisingly). It was even edited the day following the initial publishing and the word “carrier-based aircraft” (舰载 机) deleted.

But thanks to this text it is now known that these drop tests should be carried out before the “end of detailed design” (详细 设计 发 图) of the aircraft, and therefore before the industrial planning, to serve as one of the validation points on the design of the payloads, which would include the landing gear and the main radar system.

For comparison and as an example, the FC-1 program reached its detailed design in October 2002 while the final assembly of the first prototype was completed in May 2003, followed by the inaugural flight which finally occurred in August of the same year.

Of course a carrier-based AWACS is a big first for China, so the time needed between the start of the industrial phase and the first flight of the prototype could be much longer. With this in mind, an educated guess would put the roll-out of the first Chinese AWACS between the end of 2019 and the end of 2020.

As for the type of radar select for the platform, rumors mention an active electronically scanned array (AESA) radar mounted on a rotating disk. This would favor the “width” of the radar (therefore the number of installed modules) the power and the range, to the detriment of the refresh rate had it been a three-sided fixed configuration (as is the case with the KJ-2000 and the KJ-500 land-based AWACS). A quick calculation shows that in “back-to-back” configuration, the “width” of each radar face is about 15% larger than in the configuration of three fixed faces, but all of this remains to be confirmed.

During the last Zhuhai Air Show in November 2018, Institute 14 (NRIET) of the Chinese electronics group CETC unveiled a video in which an AWACS features a back-to-back AESA radar. The aircraft, of medium size and propelled by two turboprop engines, featured a quadruple vertical tail. This configuration is reminiscent of the AWACS design found in Chinese research papers, and of course share similarities with the well-known E-2 Hawkeye by Northrop Grumman.

According to the video, this Chinese AWACS carries is fitted with the KLC-7 radar, also called “Silk Road Eye” (丝路 眼), which is now offered for export. The latter is able to detect and track air targets, such as aircraft and missiles flying at very low altitude, as well as naval targets. The radar provides their coordinates in 3 dimensions.

While we ignore its connection with the Chinese Navy AWACS project that is under development, NRIET says that China is the only country in the world to offer this type of radar on the international market today. While the AN/APY-9 developed by Lockheed Martin for the E-2D Advanced Hawkeye program likely falls in the same category this version is (almost) limited to the domestic market only (Naval News note: E-2D have been exported to Japan however).

Finally, it should be noted that a full scale model of an AWACS is currently “on board” the land-based aircraft carrier (in fact an electromagnetic compatibility study platform) of the 701 Institute (CSIC) in Wuhan.

This building is in transformation since 2016 to take the shape of the island of the 3rd Chinese aircraft carrier, which will be in CATOBAR (Catapult Assisted Take-Off But Arrested Recovery) configuration. The photos as of January 2017 show that the model is on the “flight deck” alongside a Z-8 helicopter and a J-15 fighter, both in the form of full scale models as well.