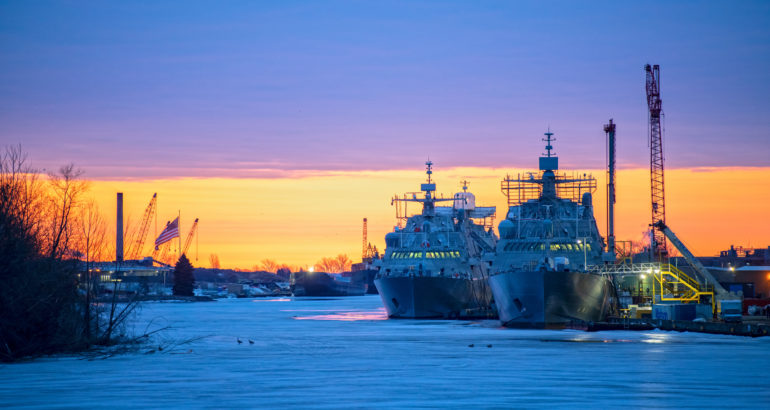 The U.S. Navy held a keel laying and authentication ceremony for the future littoral combat ship USS Marinette (LCS 25) in Marinette, Wisconsin March 27. The keel laying symbolically recognizes the joining of the ship's components and the ceremonial beginning of the ship.

The U.S. Navy held a keel laying and authentication ceremony for the future littoral combat ship USS Marinette (LCS 25) in Marinette, Wisconsin March 27. The keel laying symbolically recognizes the joining of the ship’s components and the ceremonial beginning of the ship.

Unique among combat ships, LCS is designed to serve a variety of missions today, and is easily adapted to serve future and evolving missions tomorrow.

“LCS brings something really special to the Navy. There is no other class of ship that delivers this level of flexibility for future missions. LCS is minimally manned, so the U.S. Navy can efficiently project presence around the world. It really is a remarkable ship, and our team is so proud to begin construction on the future USS Marinette for the Navy.”

The LCS class consists of two variants, the Freedom variant and the Independence variant, designed and built by two industry teams. This ship is being built by an industry team led by Lockheed Martin at Fincantieri Marinette Marine. The Lockheed Martin-led team builds the odd-numbered hulls. The Independence variant team is led by Austal USA, in Mobile, Alabama, (for LCS 6 and subsequent even-numbered hulls).

LCS 25 will be the 13th Freedom-variant LCS, and will join a class of more than 30 ships. She is one of seven ships in various stages of construction and test at the Fincantieri Marinette Marine shipyard. The littoral combat ship is now the second-largest surface ship class in the U.S. Navy. In 2018, five LCSs were delivered to the fleet, and four are planned for delivery in 2019 — a pace not seen since the 1990s.