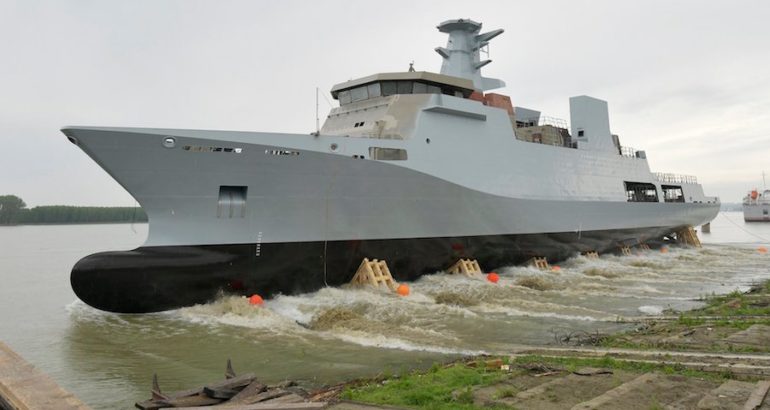 The Dutch shipbuilder Damen officially launched the first of two corvettes ordered by the Pakistan Navy (PN), on May 17 at the Galati facilities, Romania. The ceremony was attended by the PN Chief of Staff Vice Admiral Abdul Aleem.

Pakistan Navy ordered the two corvettes in 2017. The first ship is expected to join the PN Fleet by end of this year and the second would be delivered by mid-2020.

Vice Admiral Abdul Aleem, declared that the two vessels « will act as force multipliers in enhancing Navy’s capability of safeguarding maritime frontiers and would offer more flexibility in the conduct of Pakistan Navy’s initiative of independent Regional Maritime Security Patrols in the Indian Ocean Region. »

Described by Damen as an Offshore Patrol Vessel (OPV), the PN Corvettes will have a displacement of around 2,300 tons, which reportedly means that the vessels are based on the OPV 2400 design. According to Damen specifications, the model is 90 meters long, accommodate a 90-strong crew, and includes a flight deck and helicopter hangar.

The vessel can receive a wide range of mission modules, such as ASW, MCM, UAV/USV, diving support, and hospital facilities. Weapon systems include one 76 mm main gun and secondary machine guns. As of today, four vessels are « built or under construction », the shipbuilder website reveals.

Tayfun Ozberk 10 Dec 2021
The Pakistan Navy held a steel cutting ceremony for the fifth Hangor-class submarine at the Karachi shipyard on December 9, according to the Pakistan Navy's official social media accounts.