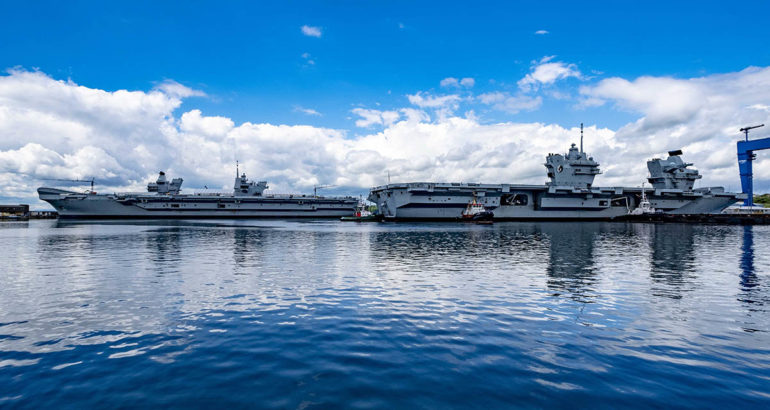 Babcock International has completed the first docking and maintenance period on HMS Queen Elizabeth at its Rosyth site, the British Aerospace and Defence company announced on May 21, 2019.

As the assembly site for the UK carrier programme, the Rosyth facility has had significant investment over recent years to support the new QE Class, which combined with the workforce’s deep and proven knowledge of the platforms, has underpinned the efficient delivery of this first docking period.

Sean Donaldson, Babcock’s Managing Director of Energy and Marine, and the Rosyth site, said: “Working closely alongside the Royal Navy, we understand the importance of ensuring that HMS Queen Elizabeth remains in optimum condition and are delighted to have undertaken the first ever docking and maintenance period here in Rosyth. Seeing the two carriers back on site together was quite a moment for our workforce, we have a real affinity with these vessels and this is a fantastic achievement for everyone who played a part in this important work.”

Head of Marine Engineering onboard, Cdr Mark Hamilton said: “It’s the first time that such a short docking period has taken place with a Royal Navy ship of this size. It’s real testament to the great working relationship forged between the MOD and industry to make this such a success. We’ll now carry the concept forwards to future docking periods, as well as to those of our sister ship HMS Prince of Wales”.

A 100-strong team undertook the docking period, which included replacing 284 hull valves and renewing all cathodic protection electrodes and anodes, as well as painting the hull and carrying out work on the stabilisers, rudders and shaft lines.

HMS Queen Elizabeth and its sister ship, HMS Prince of Wales, are the largest and most advanced warships ever built for the Royal Navy.

Due to enter the Naval service in 2020 after extensive whole ship trials, HMS Queen Elizabeth has a four-acre flight deck and two propellers weighing 33 tonnes each. She is capable of carrying up to 40 aircraft, as well as state-of-the-art weaponry and communications systems.