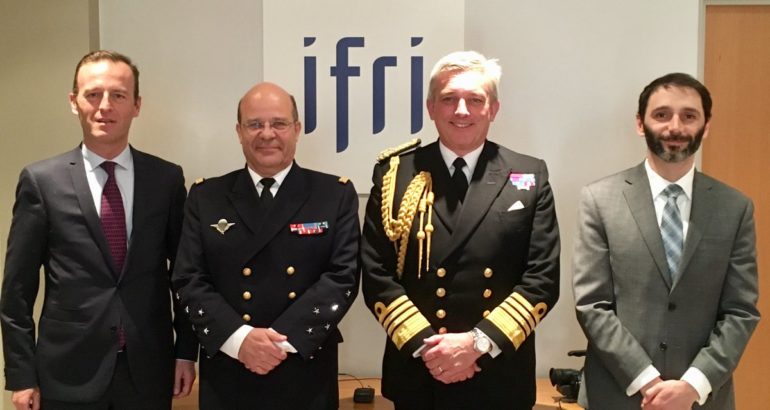 Florent de Saint Victor looks at the emerging challenges that the two leading European navies share in common: From fleet and equipment renewal to attracting, training and retaining new sailors.

During a recent joint conference organized by the French think-tank IFRI, Admiral Prazuck, Chief of Staff of the French Navy, and his British counterpart, Admiral Sir Philip Jones, First Sea Lord and Chief of Naval Staff for the Royal Navy, discussed some of the current and common challenges facing their navies. The conference was placed under the Chatham House Rule, so the remarks cannot be explicitly attributed to one or the other of the speakers (and the Q&A session can not be disclosed here), but it is nevertheless possible to highlight a couple of key points that emerged from the discussions between the two chiefs of navies.

First, a genuine and sincere shared perception by both chiefs of staff that “more than just sister navies close on different levels, we are twin navies”.  And “as with all twins, one was out of the womb before the other, and is considered to be the first. I’ll let you decide which one is which”, replied one of them. This proximity has consequences in operations and both have an undisguised desire to continue despite the current uncertainties of Brexit (a term never mentioned as such during the conference however). The two navies are described as “broad spectrum navies” faced with similar operational challenges: rearmament in quantity… and in quality, shared commitment to international law and freedom of navigation… With this real operational proximity, Marine Nationale lends a hand to the Royal Navy to fill a numbe of gaps: lack of maritime patrol aircraft, mechanical engineers, and maintaining skills and knowledge in the absence of carrier operations capacity. On the other hand, the Royal Navy assisted the French Navy with the deployment on French ships of helicopters (Merlin, Wildcat…) for amphibious or  anti-submarine warfare operations. Even if capabilities were not at the heart of the conference, the speakers mentioned some common programs in progress: mine warfare systems, anti-air missiles, cruise missiles… as a marker of this proximity.

The second point about common challenges was on human resources: retention, training, fighting spirit… In particular with similar challenges faced and various solutions being considered about how best to address this issue. Despite labor markets that are nevertheless rather different (in terms of flexibility, unemployment level, technical training held or not at the time of the recruitment…), solutions seem to be highly similar. Among solutions cited, chiefs of staffs emphasized the need of best ergonomics for complex systems “where it is not necessary to have doctoral students to understand and use them”. The challenge of new technologies (such as Artificial Intelligence, Man Machine Teaming, autonomous systems…) increase the necessity to have the right technological answer. The conditions of the operations also reflect the necessity to have crews not necessarily as small as expected to maintain resilience during deployments, or with HR systems including the replacement of some of the crews during deployments, or the importance of support facilities spread around the world (such as shipyard facilities in the Gulf area for long and distant deployments and forward deployed T23 Frigate HMS Montrose in Bahrain until 2022) . And to have the right balance between well trained and highly competent sailors. Thus, the development of highly advanced internal training and the maintenance of a high level of operational readiness are shared requirements. The words of a sailor who had experienced the Falkland War (one of the last fifty sailors in this case still active in the Royal Navy) were enlightening on the importance of resilience and degraded mode of operations. Differences could be noted on the perception of the generation of new recruits (around advantages and disadvantages of millennials), but the conclusion is the same: it will not be possible for navies to match the conditions and benefits found in the private sector. Thus, it will be necessary to propose “something else” (commitment, values, expatriation… points to which this generation is rather attached, noted one of the two chiefs of staff).

Florent de Saint Victor is an aerospace & defence consultant. He previously worked on the 2013 white paper at the French ministry of defence and for various French armed forces’ departments. Florent is also at the helm of French military blog “Mars Attaque”.