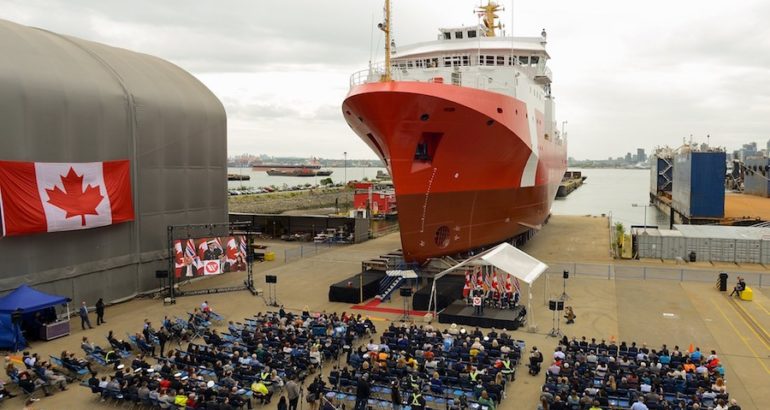 The new OFSVs will support science and research activities undertaken by Fisheries and Oceans and the CCG. This includes the collection of information on the distribution, abundance, and biology of species in Canadian waters, the impacts of climate change, and information intended to improve understanding of our oceans and marine environment.

The Minister of Fisheries, Oceans and the Canadian Coast Guard, Jonathan Wilkinson, also announced the names of both the second and third new OFSVs being built at VSY, the CCGS Capt. Jacques Cartier and CCGS John Cabot, respectively.

On May 22, the Canadian Prime Minister announced in Vancouver, the renewal of the Coast Guard fleet. With this announcement the Government of Canada signaled its intent to procure up to 18 new vessels for the Coast Guard from Canadian suppliers. This includes up to 16 new vessels that will be built at Seaspan’s North Vancouver Shipyards (VSY). These ships are in addition to the important work  already underway at VSY.

The OFSV are the first class of ships to be built by Seaspan’s Vancouver Shipyards, as part of the non-combat package under the National Shipbuilding Strategy. The new OFSVs, although primarily focused on science research, will also have the capability to support search and rescue and environmental response operations, if required.

CCGS Capt. Jacques Cartier has been named in honour of the French navigator and first European to map the Gulf of Saint Lawrence, and the shores of the Saint Lawrence River. The vessel’s home port will be in Dartmouth, Nova Scotia and following sea trials is expected to join the fleet in late 2019.

The first OFSV, CCGS Sir John Franklin, was launched in December 2017, and is expected to join the Coast Guard fleet in summer 2019. The vessel’s home port will be in Patricia Bay, British Columbia. They are 63.4 metre diesel electric drive vessels, with a displacement of approximately 3,212 tonnes and a top speed of 13 knots.

The new OFSV will include four science labs: a wet lab, a dry lab, an ocean lab and a control lab, to support scientific research. They will replace existing Coast Guard ships on the east and west coasts of Canada that provide a platform from which critical scientific research can be performed.