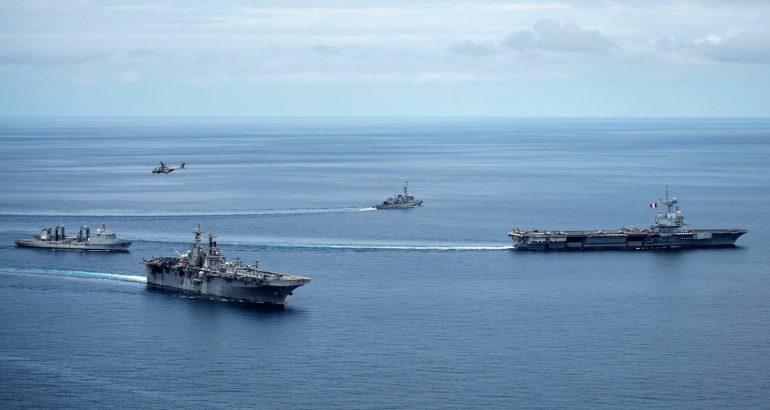 “The opportunity to train with the French Navy demonstrates the ARG’s capability to operate with our allies and partners in the Indo-Pacific. Our Sailors and Marines benefitted greatly from working with our French counterparts.”

Events like this occur routinely throughout the Indo-Pacific and reflect shared values, principles and traditions between like-mineded naval forces.

“Exercises allow allied units to test and validate concepts, procedures, systems and tactics. That is why we seize each opportunity to plan exercises at sea with our allies and partners to increase our mutual knowledge and ability to work together.”

The French Navy carrier strike group deployment is the first in the Indo-Pacific region since 2002.

“The American and French militaries have a long and successful relationship after many years of working together and we’re honored to add a chapter to that history,” said Col. Fridrik Fridriksson, 11th Marine Expeditionary Unit (MEU).

Additionally, Boxer hosted distinguished visitors to tour the ship and learn more about the Boxer ARG and embarked Marines from the 11th MEU.

“I am excited to work with America’s oldest ally, dating back to America’s revolutionary war. Our countries have shared success throughout the decades and a good part of that success is due to our strong relationship. Today, we’re enhancing that relationship by stressing integration of our systems and capabilities.”