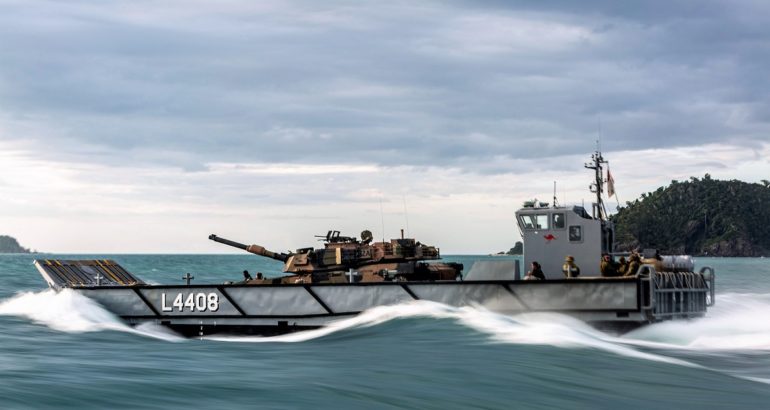 Talisman Sabre 2019 which concluded July 29, 2019 was Australia’s largest bilateral defense exercise with the US. Held every two years, it is designed to improve the combat readiness and interoperability between the two countries.

Royal Australian Navy assets that participated in the exercise were HMAS Adelaide, HMAS Canberra, HMAS Farncomb, HMAS Melbourne, HMAS Parramatta. Overall, the exercise (the largest to date) encompassed over 34,000 personnel, 22 ships and over 200 aircraft, with participation from Japan, Canada, the UK and New Zealand.

HMAS Canberra (L02) is the lead ship of the Canberra-class landing helicopter dock (LHD) of the Royal Australian Navy. Displacing over 27,000 tons, with a length of 230 meters, it is the flagship of the Australian fleet.

Commissioned in November 2014, HMAS Canberra‘s flight deck features a 13 degree ski-jump and 6 in-line deck landing spots. It can accommodate up to 18 helicopters in its hangar. Its well deck can fit four landing craft. Canberra has a total capacity for up to 110 vehicles including 12 M1A1 MBT. Its heavy vehicle deck is 1,410 m² and its light vehicle deck is 1,880 m². The amphibious vessel has accommodation for 1,046 troops, while its crew consists in about 350 sailors.

The Royal Australian Navy uses the LCM-1E as ship to shore connectors. With a length of 23.30 meters, these landing craft have a maximum speed in excess of 20 knots, a range of 190 nautical miles (at full load) and can carry Abrams MBT, several Army vehicles, fusiliers’ company or 20 feet container truck. 12 LCM-1E were procured from Spain in a contract signed in September 2011. Both the landing craft and the two Canberra class LHDs were procured from Spain’s Navantia.

The Australian Army has 59 M1A1 (AIM) configuration main battle tanks. These tanks were procured from the U.S. in 2006 and replaced the Leopard AS1 in 2007.