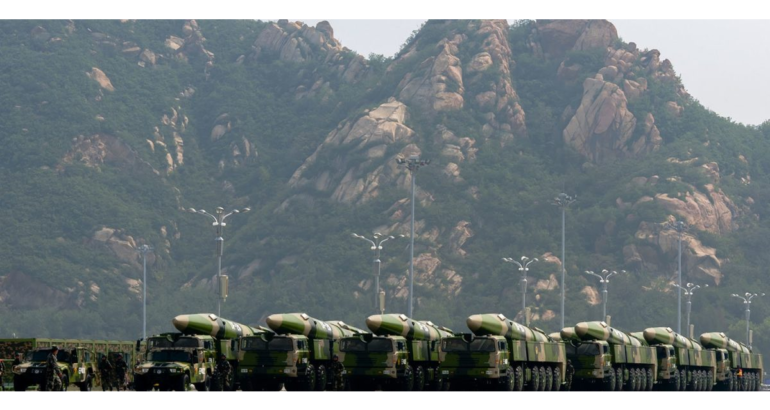 First revealed by American channel CNBC before being confirmed by the Pentagon, these ASBM launches conducted by the Chinese Rocket Force involved six missiles that hit two different zones in the sea. The identification of the exact missiles used in these tests is still going on.

CNBC’s text, published on July 2nd, citing two US officers with knowledge of the matter, refers to a “series of ASBM tests” of which at least one targeted the sea during the weekend, and they were potentially waiting for follow-on tests until Wednesday, July 3rd.

Several US Navy ships were present at the time in the South China Sea but none were near the area or endangered, according to one of the officers who is not allowed to reveal other details. First referred to as “concerning” by these US officers, Lieutenant-Colonel Dave Eastburn, Pentagon spokesman, then used the word “disturbing” commenting on the event.

“The Pentagon was aware of the launch of Chinese missiles from the artificial structures of the South China Sea near the Spratley Islands,” said Eastburn. “What is really disturbing about this act is that it is in direct contradiction to President XI’s statement … that he would not militarize these artificial outposts.”

But this first statement that the ASBMs were launched from the Spratleys, south of the South China Sea, seems both unlikely and unfounded – Deploying and using weapons of this category from these sites such as Subi Reef (which is the largest in the Spratleys Islands with its 5.52 km²) is seriously lacking strategic depth. It would be a mistake because the TEL vehicles have nowhere to shelter and are very vulnerable targets to preventive strikes, while on the continent these same vehicles can easily merge with the extent of the Chinese road network and hide in one of the numerous underground fortifications.

It should be noted that in positioning ASBMs in the Spratleys fortified reefs does not bring more tactical advantages (including range) to reach large naval targets such as aircraft carriers and helicopter carriers operating in the South China Sea. A deployment in the island of Hainan or in the mountainous provinces of Guizhou and Yunnan will be more than enough in this case.

The second response, sent to Reuters, is essentially the same message but added “The relevant reports do not accord with the facts”.

Admitting that the Chinese MoD speaks the truth (meaning these launches are indeed part of the annual training plan of the Chinese Rocket Force and not some kind of answer to the combined operation of the Reagan CSG conducted with the JMSDF in June in the South China Sea) we could then consider these ASBM launches as an extension of the January exercise led by the Chinese army led in southern China, where the Rocket Forces as well as other corps (Strategic Support Force, Navy …) worked together in a counter-offensive simulation. Rumors had spoken at that time of actual firings planned “in a few months” to put this joint training into practice.

In reality, these rocket launches of the weekend of June 29-30 were more or less known in advance – Indeed, a security alert had been issued by the Chinese Maritime Safety Administration to signal the closure of a maritime area for “military exercises” in the middle of the South China Sea (see the red box below).

In addition to this ban on maritime access, there was the closure of the airspace also, this time in another zone (see the yellow zone at the bottom) and at a different time. The information is described in a message to aircrafts (NOTAM) A3298 / 19 and the ban on air access at all altitudes was only valid for a short time, on July 1st from 7:00 to 12:00 pm Beijing time.

Comparing the maritime safety alert HN-0075 and the NOTAM A3298 / 19 then makes it possible to find the exact shooting window, which is in fact the same as that indicated in the NOTAM. The Chinese ASBM likely took off on Monday, July 1 in the morning.

This date is also confirmed by a US military officer speaking under condition of anonymity, quoted by the Japanese media NHK, according to which six ballistic missiles were launched from the mainland to the South China Sea on Sunday, June 30, Pacific Time.

Given the 15 hour time difference between Beijing (UTC + 8) and Pacific Time (UTC-7), this amounts to saying that the tests were listed by the Americans on the 1st of July Beijing time.

The same source has provided an additional element – the six ASBMs actually hit two distinct areas at sea. But the missile type (s) – namely DF-16x, DF-21D or DF-26C or more – is still being investigated.

A US military official has told NHK that China has test-fired missiles from the mainland into disputed waters in the South China Sea for the first time.
The official said that the Chinese military launched a total of six missiles from the mainland on Sunday, US Pacific Time, and they landed in two separate areas in the South China Sea.
The official said the US military is now analyzing the types of missiles that were fired.

Apart from this open question on the type or types of ASBM used, the Chinese missile departure site is also an interesting point to study. No real photos or videos are available at the moment to allow the identification of locations, but by drawing a line connecting the two no-go zones takes us to the mountainous province of Guizhou, especially near Anshun, where new anti-ship units of the Chinese Rocket Force would be based.

We will also study the question of the utility of the two areas in question – did the missile heads hit the yellow zone or the red zone instead? Knowing that the shallowest spot in the red zone is still 293 meters deep, this makes any recovery operation more difficult than if it had been in the yellow zone.

Then where were (at the time of the firing) the optical, radar and electromagnetic satellites constellations that China has launched these past 10 years to trace and identify “large surface vessels”? Was the supersonic reconnaissance drone designed by the 611 Chengdu Institute to assess strike damage been deployed? Has the Chinese army used maneuverable or fixed targets at sea?

These are all questions that remain to be studied, we will not fail to return to these topics soon.

To be continued.
Henri K.