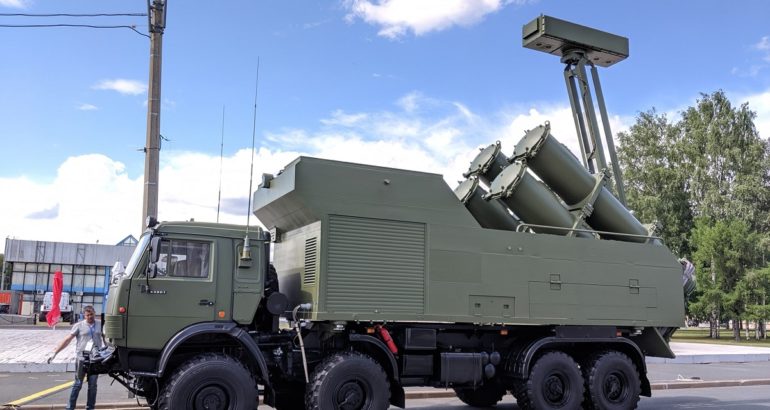 A new lightweight version of the Bal-E coastal defense system was unveiled at IMDS 2019. The Rubezh-ME is based on a more compact Kamaz 8x8 chassis and deploys the same KH-35 family of anti-ship missiles. IMDS is the naval defense exhibition which opened its doors today in St Pertersburg, Russia.

The Rubezh-ME is dedicated to the export market. The developer is reportedly the JSC Research and Production Enterprise Kaluga Instrument-Making Plant Typhoon (which is part of the Morinformsystem-Agat Concern).

According to the previously published data by the Kaluga instrument-making plant Typhoon on this system during its development, the Rubezh-ME complex includes a self-propelled command and control and communications center (SKPUS) equipped with the Monolith-B radar and autonomous self-propelled launchers ( SPU). The system also includes transport and handling machines. All elements of are installed on the chassis of KamAZ vehicles (8×8).

Centralized fire control is implemented by using self-propelled command and control and communications command center (SKPUS), which provides target designation and optimal target distribution between launchers, depending on their combat readiness and location in a combat position. The presence of high-precision active and passive radar detection channels allows for a flexible detection strategy, including secretive. It is also possible to obtain operational information from higher command posts and external means of reconnaissance and targeting both SKPUS and individual launchers.

The presence of a additional anti-ship missiles on a transport-handling vehicle makes it possible to carry out a multiple salvo firing after reloading of the launcher, which increases the firepower and combat effectiveness of the system.

The 8×8 vehicles provide NRBC protection as well as high mobility.

Naval News Staff 01 Nov 2021
The Russian Navy will begin acceptance test launches of the Tsirkon hypersonic missile from the Admiral Gorshkov frigate of the Northern fleet this month.

Xavier Vavasseur 29 Oct 2021
The 7th Indian Navy Frigate of P1135.6 class was launched on 28 Oct 2021 at Yantar Shipyard, Kaliningrad, Russia in presence of Shri D Bala Venkatesh Varma, Ambassador of India (Moscow) and senior dignitaries of the Russian Federation and officials of the Indian Navy.