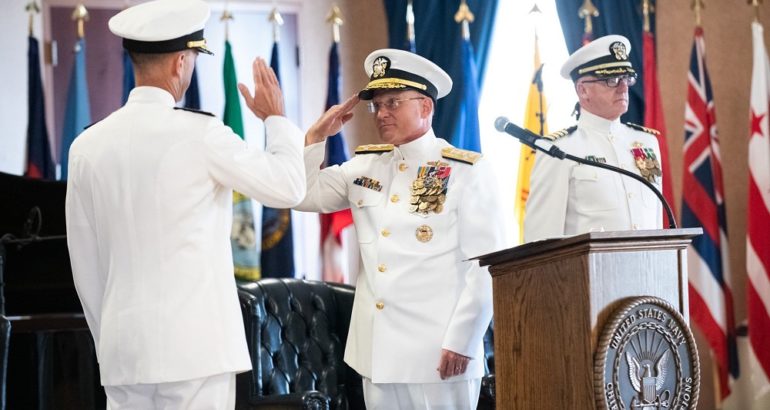 Adm. Mike Gilday relieved Adm. John Richardson as the Chief of Naval Operations (CNO) in a ceremony, Aug. 22, at the Washington Navy Yard.

Gilday became the 32nd CNO, the U.S. Navy’s most senior officer. As a member of the Joint Chiefs of Staff, the CNO acts as an advisor to the President of the United States, the National Security Council, the Homeland Security Council, and the Secretary of Defense. Under direction of the Secretary of the Navy, the CNO is responsible for the command, utilization of resources, and operating efficiency of naval forces and shore activities assigned by the Secretary.

The Secretary of the Navy Richard V. Spencer acted as the presiding officer and guest speaker at the ceremony. In his speech, Spencer focused on the Navy’s many accomplishments during Richardson’s tenure.

“The Sailors serving this nation are constantly on Adm. Richardson’s mind and close to his heart. As much as Adm. Richardson has done for our capabilities and processes, he’s done more for our people. Thanks to his efforts, the men and women of the U.S. Navy are safer, better prepared, and better commanded while standing watch around the world.”

Before concluding, Spencer spoke about the future of the Navy.

“Adm. Gilday has already played a critical role in restoring our readiness and lethality, and he’s well positioned to help take our integrated naval force into the next decade.”

During the ceremony, Gilday spoke about the status of the Navy and what he sees in the service’s future.

“I believe our Navy’s strategic direction is rock solid and that our Navy is in great shape,” said Gilday. “We are recruiting and retaining a high-quality force, we are providing well trained combat-ready forces forward, around the globe. We are modernizing our Navy at a scope and pace not seen in decades. I can say all that, in large part, due to the leadership of our 31st CNO.”