Home» News»HMS Kent left Portsmouth for the Strait of Hormuz 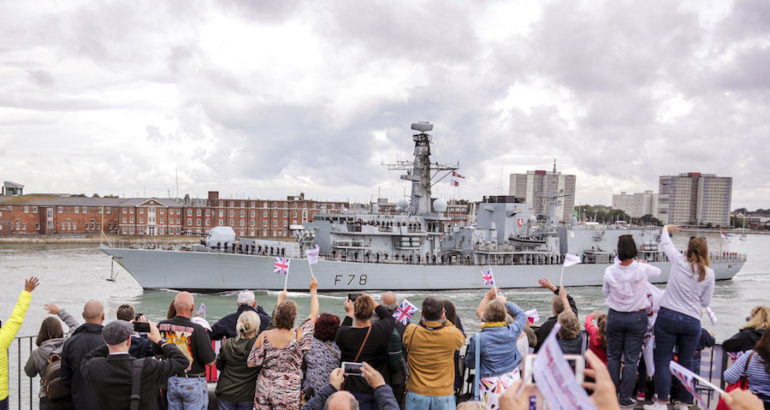 HMS Kent left Portsmouth for the Strait of Hormuz

HMS Kent yesterday left Portsmouth to embark on operations to the Gulf, the Royal Navy announced in a statement.

Type 23 frigate HMS Kent will relieve HMS Duncan of her duties in the Gulf and is scheduled to work alongside US partners as part of the newly-formed International Maritime Security Construct. She will be focused on providing regional maritime security, including counter-terrorism and anti-smuggling activities.

She will also work alongside HMS Montrose to escort British-flagged vessels through the Strait of Hormuz.

Commander Andy Brown, Commanding Officer of HMS Kent, said: “Today’s departure on operations has been achieved through the hard work and support of the ship’s company, their families and the wider defence enterprise.

“Our focus in the Gulf remains firmly one of deescalating the current tensions. But we are committed to upholding freedom of navigation and reassuring international shipping, which this deployment on operations aims to do.”

Events in the Gulf over the last four months, including attacks on four tankers off the coast of the United Arab Emirates and the illegal seizure of the British-flagged oil tanker Stena Impero, have seen the threat to commercial shipping rise. The Strait of Hormuz is the busiest narrow shipping passage in the world and a vital transit zone with 20% of the world’s oil passing through it every year.

On 19 July, British-flagged oil tanker Stena Impero was seized by Iran’s Revolutionary Guard in the key shipping route. A second British-linked tanker, the MV Mesdar, was also boarded by armed guards but was released. The UK government then decided to provide a Royal Navy escort for British-flagged ships passing through the Strait of Hormuz. Besides the Type 45 HMS Montrose, UK in early July dispatched HMS Duncan “to ensure we maintain a continuous maritime security presence while HMS Montrose comes off task for pre-planned maintenance and crew change over.”