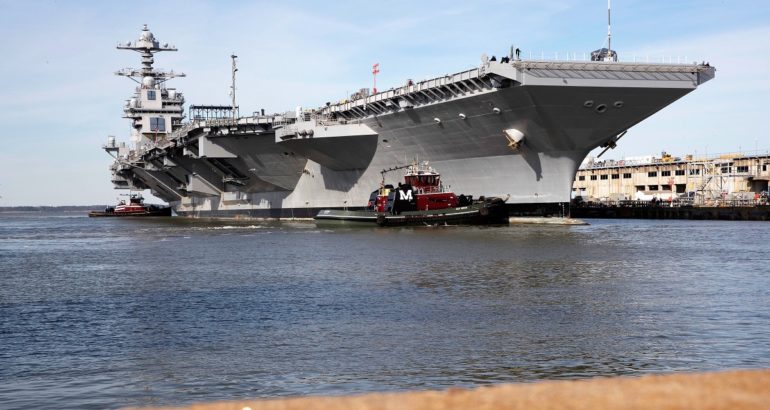 The U.S. Navy declares its newest aircraft carrier, USS Gerald R. Ford CVN78, propulsion plant has "reached completion" over two years after the ship's delivery in May 2017. Major unspecified issues have now been fixed but the ship remains in the shipyard at Newport News Shipbuilding.

After more than 12 months of maintenance and repairs, the Navy accepted re-delivery of the propulsion plant upon PPCD, marking significant progress in Ford’s post-shakedown availability (PSA), and driving the ship closer to getting back out to sea.

“For the past year or so, the focus has been supporting the shipyard in propulsion plant production work. With hard work, innovation, and teamwork, reactor department Sailors and their shipyard counterparts together have achieved a major milestone. We now enter the transition phase, where our focus shifts from a shipyard production work mindset to a ship’s force operational and maintenance mindset. Reactor Department Sailors are owning it!”

In May 2018, three days into a planned underway to continue testing and evaluation, the ship experienced another propulsion plant issue associated with a design modification which resulted in Ford returning to homeport. Once in Norfolk, adjustments were made and the ship returned to sea later that month.

Ford returned to port June 7, 2018, following the successful completion of all required ship testing during its at sea period. During these tests, the Navy and Newport News Shipbuilding determined the required steps to correct the manufacturing defects would be fully corrected during Ford’s PSA.

As a first-in-class ship, some issues were expected, giving rationale for the long periods of testing and evaluation. Ford was tasked with conducting critical test and evaluation operations that are meant to identify construction and design issues. Ford’s propulsion issues weren’t with the nuclear reactors themselves, rather the issues resided in the mechanical components associated in turning steam created by the nuclear plant into spinning screws that propel the ship through the water.

During Ford’s PSA, Sailors worked alongside HII-NNS shipyard technicians to complete 400,000 man hours of maintenance and production work to reach this important milestone, but Ford Sailors are still working hard every day to get the ship ready to join the rest of the fleet and return to sea to complete additional aircraft carrier qualifications.

Lt. Cmdr. Deron Spencer, from Winnsboro, Texas, Ford’s reactor maintenance officer said that he can see the mindset shifting through the reactor department.

“Instead of being focused on coming to support the shipyard work, it’s ‘what ship’s force preventative maintenance am I required to do to maintain equipment?’” said Spencer. “There’s also training evolutions and walkthroughs being conducted. The day shifts from the production environment to an operational environment.”

Since first getting underway on April 8, 2017, Ford has safely conducted 10 underway evolutions and has completed all of the testing that was required prior to beginning the ship’s PSA last summer. Collectively, this has brought a tremendous amount of knowledge to the Ford-class program. The lessons learned, corrections, and design changes can be integrated in the construction of the next ships in the Ford-class of aircraft carriers.

“We have asked a lot of the Sailors in Reactor Department. They have answered with a tremendous effort and teamwork to achieve every milestone required of them,” said Bassett. “We own the fight, we own the maintenance, we own the priorities and we own the end state.”