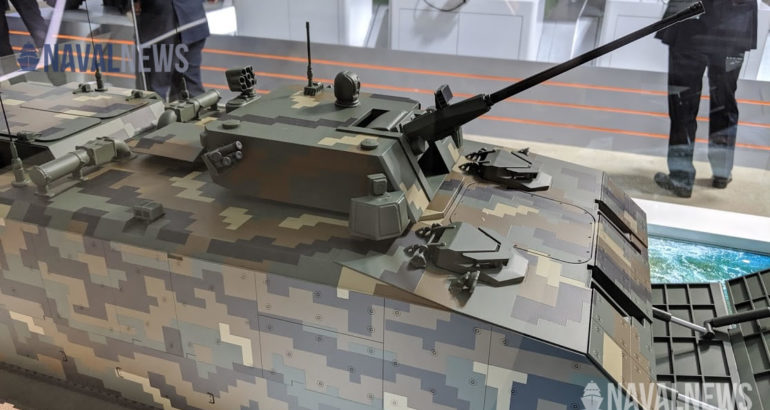 KAAV II stands for Korean Amphibious Assault Vehicle II, and is intended to replace the existing AAVs currently in use with the ROK Marine Corps. About 150 AAVs were built under license by Hanwha Defense.

According to SangChul Sim, Vice President / Research Institute for the KAAV-II program at Hanwha Defense, the project is currently in “exploratory development stage”. This stage is set to be completed in September 2022. It will be followed by the system development stage that will start in 2023 and finish in 2028. The KAAV-II program will then enter mass production from 2029.

The KAAV-II design has a crew of three and can accommodate up to twenty one marines. It has a maximum speed of 70 Km/h on land and 25 Km/h on water (13.5 knots). It can cross a distance of 480 Km on a single fuel tank, and has an endurance of 2 hours on the water.

KAAV-II will feature rubber tracks (by Soucy) in order to reduce its weight and increase its speed. To achieve good performance on the water, the underside of the hull features a system which can deploy some side flaps under the tracks in order to reduce water resistance. When on the water, the KAAV-II is propelled by two large (600mm diameter) water-jets designed by a local supplier.

The scale model on display at ADEX 2019 features an unmanned turret with a 40mm case telescoped (CT) canon. According to Hanwha Defense, this canon is under development by local company S&T and will deploy a future cased telescoped ammunition by South Korean company Poongsan.

The KAAV-II will be deployed from the ROK Navy Dokdo-class amphibious assault ships.