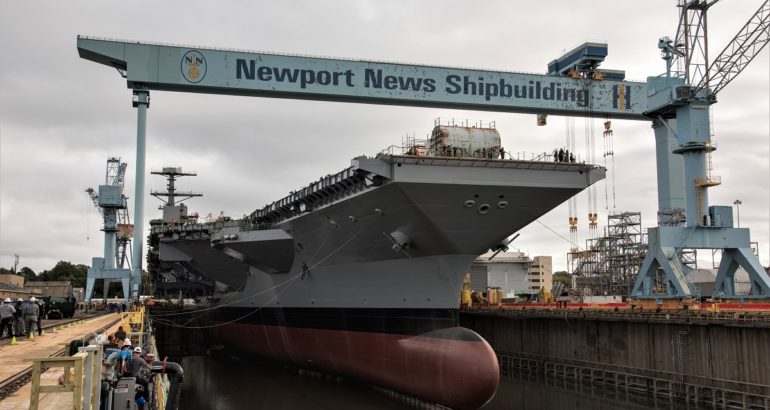 The flooding of Dry Dock 12, which began on Tuesday at Newport News Shipbuilding, was the first time the aircraft carrier John F. Kennedy (CVN 79) touched water. The ship will be christened in December. Photo by Ashley Cowan/HII

Huntington Ingalls Industries (HII) began flooding the dry dock at its Newport News Shipbuilding division on October 29, where the keel of aircraft carrier John F. Kennedy (CVN 79) was laid in 2015.

The controlled process of slowly filling the dry dock with more than 100 million gallons of water takes place over several days, and marks the first time the ship has been in water.

“The flooding of the dry dock is truly a historic event in the construction of the ship and a special moment for the men and women who have worked to get the ship to the point. We have made remarkable progress with Kennedy’s construction, and are pleased to get to this phase of construction three months ahead of the original schedule and fewer man hours. We look forward to the upcoming christening and launch as we prepare to start our testing program.”

The flooding of the dry dock takes place in phases during which various tests are conducted. The dock initially was flooded about 10 feet high to its keel blocks, wood-capped concrete pads on which the ship has been supported during construction. Once the dock is fully flooded and initial testing is complete, the ship will be floated to the west end of the dry dock. Next month, additional tests will take place prior to Kennedy’s christening on Dec. 7.

More than 3,200 shipbuilders and 2,000 suppliers from across the country are supporting the construction of Kennedy. Following the christening, Kennedy will undock into the James River where outfitting and testing of the ship’s systems will continue until the ship is delivered to the U.S. Navy in 2022.