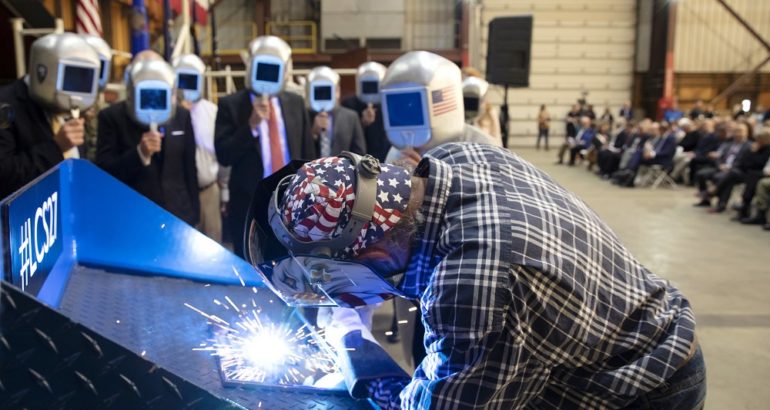 Lockheed Martin and Fincantieri Marinette Marine marked the beginning of construction on Littoral Combat Ship (LCS) 27, the future USS Nantucket, with a ceremony in Marinette.

As part of a ship-building tradition dating back centuries, a shipyard worker welded the initials of Polly Spencer, USS Nantucket ship sponsor and wife of U.S. Secretary of the Navy Richard Spencer, into the ship’s keel plate. This plate will be affixed to the ship and travel with Nantucket throughout its commissioned life.

“The USS Nantucket will confront many complex challenges. It will confront humanitarian relief all the way to great power competition, drawing on the strength of every weld, every rivet applied by the great people here.”

” said Richard V. Spencer, the U.S. Secretary of the Navy.

Unique among combat ships, the focused-mission LCS is designed to support mine countermeasures, anti-submarine and surface warfare missions today and is easily adapted to serve future and evolving missions tomorrow. The Freedom-variant LCS is:

“LCS’ built-in flexibility makes it unlike any other Navy ship in the water today. LCS can serve a multitude of missions to include surface, anti-submarine and mine countermeasure missions by quickly integrating mission equipment and deploying manned and unmanned aerial, surface or sub-surface vehicles.”

LCS 27 is the first Navy ship to be named after Nantucket, Massachusetts in more than 150 years. Nantucket has a deep connection to sailing and maritime traditions, serving as a whaling hub in the 1800s and as the home of generations of American sailors since the town’s beginning. The previous USS Nantucket, the first to be named after the island, was commissioned in 1862 to serve during the American Civil War.

LCS 27 will be the 14th Freedom-class LCS and will join a class of more than 30 ships. It is one of six ships in various stages of construction and test at the Fincantieri Marinette Marine shipyard.