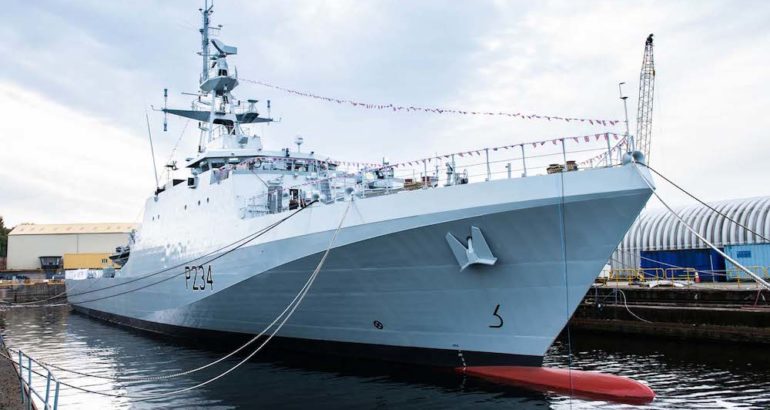 The fifth and final new patrol ship for the Royal Navy was yesterday formally named as work on HMS Spey nears completion. The ceremony almost closes the chapter on a seven-year programme which will give the Royal Navy a flotilla of brand-new patrol ships ready for deployment around the globe - Naval News.

Constructing the vessels has directly supported 1,700 jobs north of the border and a further 2,300 jobs around the UK in the supply chain. And they have helped maintain key shipbuilding skills – vital now work has started on the first Type 26 frigates, also on the Clyde.

As with her sisters, HMS Spey was built at BAE’s facility at Govan, then moved down the Clyde to their Scotstoun yard for fitting out.

The latest incarnation is 90 metres long, equipped with a 30mm main gun, a flight deck which can host Merlin and Wildcat helicopters and space for 50 Royal Marines/soldiers for specific missions.

Spey will be used for general patrol duties, counter-terrorism/anti-smuggling missions, provide disaster relief where needed, act as the UK’s eyes and ears on the high seas and fly the flag for Britain’s global ambitions.

At present, the 2,000-tonne warship has a handful of sailors assigned to her, with more joining over the winter and first Commanding Officer Lieutenant Commander Ben Evans due to arrive in late April, just as his men and women move on board to breathe life into Spey and prepare to take her to sea for the first time.

“As she’s the final ship in the class, Spey has benefited from many of the lessons learned building and testing Forth, Medway, Trent and Tamar. They have blazed a trail for us, so I’d like to think of HMS Spey as last – but best.”

“The official naming is an important milestone – it marks the true beginning of the life of HMS Spey,” said Commanding Officer Lieutenant Commander Ben Evans.

“There is still a long road ahead of us – it will be at least 12 months before Spey makes her debut in Portsmouth. It will demand a lot of hard work from both the hundreds of shipwrights, engineers and technicians completing Spey and her ship’s company when they join. We are all determined to make her a success, proudly carrying the name of a great river around the world for many years to come.”

Of the four ships ahead of Spey, HMS Forth is preparing to sail for the Falklands, after maiden helicopter trials HMS Medway is conducting fishery and security patrols, HMS Trent has completed sea trials and is in the final stages of fitting out, and HMS Tamar is gearing up for her first spell at sea.