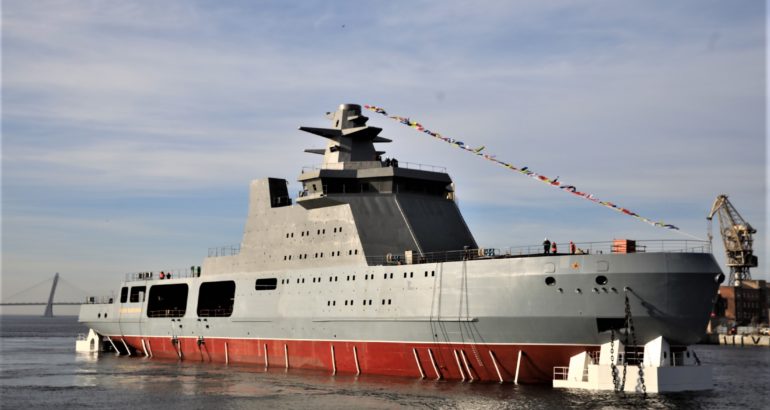 Admiral Viktor Chirkov from the United Shipbuilding Corporation said Russia for the first time got a universal ice-class warship. “It has to ensure security of navigation and research in the Arctic and protect our national interests,” he said.

The warship can operate as a tugboat, escort ship and an icebreaker. It will operate in ice, escort detained vessels to seaports, support supply ships, participate in rescue operations and deliver special cargoes. The ship has a displacement of 8500 tons, is over a hundred meters long and 20 meters wide, The cruising capacity is 60 days.

For the record, the Project 23550 is a multirole icebreaker combining the functionalities of a tugboat, patrol ship and an icebreaker capable of breaking ice up to 1.7 meters thick. Project 23550 ships are designed to protect and monitor Arctic water resources; escort and tow other vessels; act as a support vessel; participation in rescue operations; transport various cargo in the Arctic…

The vessel has a total displacement of about 9,000 tons; a length of about 114 meters; a width of about 20 meters and a draft of about 6.0 meters. Its maximum speed is 18 knots; economic speed of 10 knots; crew / additional crew of about 60/50 people. The endurance is 70 days at sea. Arctic ship category: Arc7.

In terms of weapon systems and equipment, Project 23550 vessels are fitted with a 76-mm AK-176MA main gun; portable air defense systems; helipad and helicopter hangar able to accommodate a Ka-27 class helicopter and unmanned aerial vehicles; two Raptor high-speed assault boats of the Raptor type and one Project 23321 hovercraft. Last but certainly not least, the vessel can be fitted with a containerized version of the Kalibr-NK missile system.