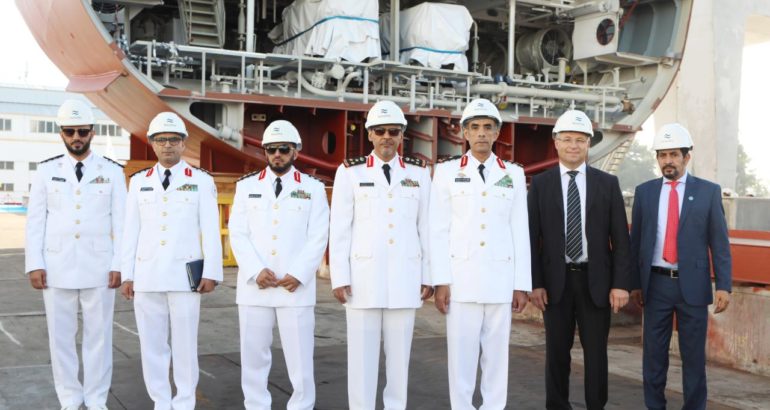 The surface combatants are being built for the Royal Saudi Naval Forces (RSNF) at Navantia’s San Fernando shipyard and are due to be delivered by 2023.

The keel-laying represents a significant landmark in the construction of the vessels, which is one of the key components of the joint venture agreement established between SAMI and Navantia.

“Today’s event marks a major milestone in our collaboration with Navantia as we endeavor to further strengthen the Royal Saudi Naval Forces’ outstanding maritime capabilities through the manufacture of these five state-of-the-art vessels. This project represents a proof of concept for His Royal Highness Crown Prince Mohammed Bin Salman’s vision for the localization of 50% of military equipment spending by 2030.”

In addition to the construction of the vessels, the Avante 2200 project will encompass Life Cycle Support for five years from the delivery of the first vessel, with an option for an additional five years. SAMINavantia will provide Combat System Integration (CSI) and ‎installation as part of a landmark contract worth over €900 million signed at DSEI 2019 in September. The joint venture is also responsible for system engineering and architecture; hardware design; software ‎development, testing and verification; prototyping, simulation and modeling; and the delivery of logistical support and training programs.

The five-year project will create jobs for 6,000 people, including 1,100 direct employees, over 1,800 employees of the Auxiliary Industry of Navantia, and more than 3,000 indirect employees generated by other suppliers. The fourth and fifth corvettes will be finalized and delivered within Saudi Arabia, contributing to the development of the Kingdom’s defense ecosystem through the transfer of technology and creation of new career opportunities. The agreement has the potential to boost the localization of the Kingdom’s technology capabilities by up to 60%, in line with goals of the Saudi Vision 2030.

The five Avante 2200 corvettes are being specially adapted to meet RSNF requirements, including the capability to operate in the extreme temperatures found in the region. The multirole vessel is designed specifically for surveillance and maritime control, search and rescue, and providing assistance to other vessels during missions.