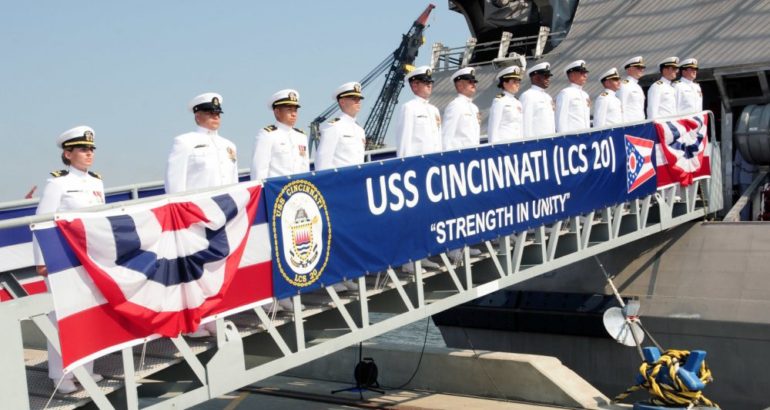 USS Cincinnati is the fifth U.S. Navy ship to honor Ohio’s third-largest city. The first was a stern-wheel casemate gunboat that served during the Civil War and was sunk by Confederate fire on two separate occasions. Raised both times and returned to service, she was decommissioned following the war.

The second Cincinnati was a cruiser commissioned in 1894. She served extensively in the Caribbean before, during, and after the Spanish-American War before being decommissioned in 1919.

LCS is a modular, reconfigurable ship, designed to meet validated fleet requirements for surface warfare, anti-submarine warfare and mine counter measures missions in the littoral region.

An interchangeable mission package is embarked on each LCS and provides the primary mission systems in one of these warfare areas. Using an open architecture design, modular weapons, sensor systems and a variety of manned and unmanned vehicles to gain, sustain and exploit littoral maritime supremacy, LCS provides U.S. joint force access to critical areas in multiple theaters.