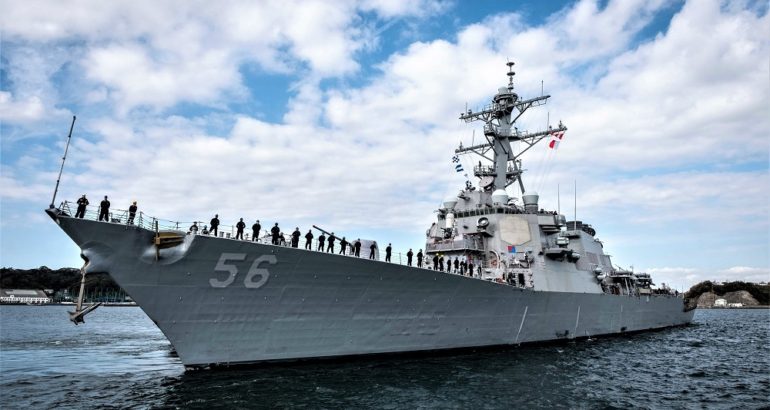 During the at-sea testing, the ship and her crew will perform a series of demonstrations to evaluate that the ship’s onboard systems meet or exceed Navy performance specifications.  Among the systems that will be tested are navigation, damage control, mechanical and electrical systems, combat systems, communications, and propulsion application.

John S. McCain, assigned to Destroyer Squadron FIFTEEN (DESRON 15) and forward-deployed to Yokosuka, Japan, completed her in-port phase of training, and will continue Basic Phase at-sea training in the upcoming months to certify in every mission area the ship is required to perform and prepare for return to operational tasking.

“The USS John S. McCain embodies the absolute fighting spirit of her namesakes, and shows the resiliency of our Sailors. She has completed her maintenance period with the most up-to-date multi-mission offensive and defensive capabilities, preparing her to successfully execute a multitude of high-end operations. As a guided-missile destroyer assigned to Destroyer Squadron 15, the John S. McCain is poised and ready to contribute to the lethal and combat ready forward-deployed naval force in the free and open Indo-Pacific region.”

“This whole crew is eager to get back to sea, and that’s evident in the efforts they’ve made over the last two years to bring the ship back to fighting shape, and the energy they’ve put into preparing themselves for the rigors of at-sea operations. I’m extremely proud of them as we return the ship to sea, and return to the operational fleet more ready than ever to support security and stability throughout the region.”