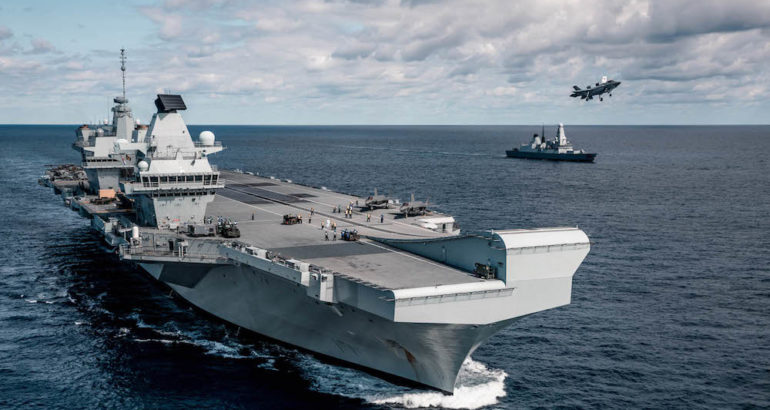 Portsmouth Naval Base has undertaken a programme of infrastructure upgrades ahead of the arrival of the UK’s second Queen Elizabeth aircraft carrier, HMS Prince of Wales, the Royal Navy said on November 5.

The anticipated arrival of not just one but two of the 65,000 tonne behemoths and their crews meant that the naval base needed more power, space and another specially equipped jetty to accommodate them.

Captain of the Base, Captain David George said: “Quite rightly the vast bulk of the preparatory work is physical in nature, but the arrival of the second carrier marks a step change in operational output.

Chief among the changes for the arrival of HMS Prince of Wales was a jetty suitable to accommodate her. Both carriers may need to be harboured at any one time so a second jetty in addition to the Princess Royal Jetty built for HMS Queen Elizabeth was needed.

As a result, Portsmouth Naval Base’s Victory Jetty, built in the late 1990’s, has been strengthened and modernised at a cost of £30 million. This included additional piling to take the increased berthing loads, galvanic protection of the existing structure to extend its life and a pumping system to lift the fresh water required for up to 1600 crew.

A big part of the project has been providing the high voltage electrical system to provide shore power, including large conversion machinery and a massive hydraulic boom to feed the power to the carrier. With limited power capacity on Portsea Island, the power to light, heat and run machinery when this extra small town comes alongside is to come from the base’s new Combined Heat and Power plant (CHP).

This is a standalone energy source to provide off-grid sustainable energy for the base. The £13 million CHP plant produces electricity from mains gas and captures the heat generated for use, reducing the Naval Base’s carbon footprint. At its peak, the CHP can produce 13.5 MW of power, enough to power between 18,000 and 25,000 homes.

Additional support equipment was also required such as automated brows to move people on and off the ship and two bespoke Fender Spacer Units, built in Portsmouth, and installed on the Victory Jetty. The structures, which measure 17.6m by 18.7m, slot into the jetty and move up and down with the tide to prevent the ship’s overhanging flight deck from any collision while alongside.

Captain Iain Greenlees, team leader of the carrier infrastructure programme since 2009 said:  “These projects bring to a close a historic period of development for the base, covering 8 years of environmental and costs assessment and 6 years of construction.  Delivering this programme to time and cost has only been possible by MOD and large teams of industry partners working closely together, with the support of the city and harbour users, to get the base ready to support these fabulous ships for the next 50 years.”