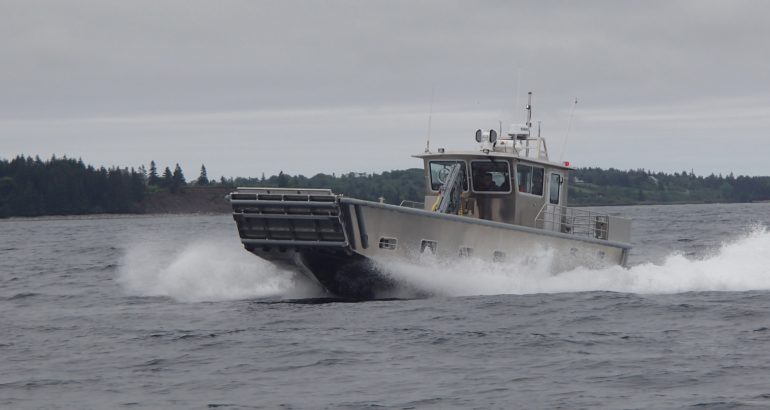 ABCO Industries Inc. (ABCO), based in Lunenburg, Nova Scotia completed sea trials for the 12 metre landing craft in the summer of 2019 and delivered the first vessel in October 2019.

They will supply these support boats for each of the Arctic and Offshore Patrol Ships (AOPS) currently under construction at Halifax Shipyard for the Royal Canadian Navy.

The landing craft will be used to transfer personnel and equipment to shore where there are little or no port services available. It can carry 4 tonnes of cargo, vehicles, or personnel and transfer them to a beach or pier via a bow door or an installed crane.

The sea trials involved operating all of the equipment installed on the landing craft, recovering a side-by-side ATV from a beach, and running the boat at various speeds and loading conditions – all to ensure that it meets the requirements set forth by Lloyd’s Register and the Government of Canada.

Canada’s defence policy – Strong, Secure, Engaged (SSE) – committed to the acquisition of six Arctic and Offshore Patrol Ships (AOPS). Designated the Harry DeWolf-class in honour of Vice-Admiral Harry DeWolf, a Canadian wartime naval hero, the vessels will be delivered through the AOPS project, which is part of the National Shipbuilding Strategy.

The Harry DeWolf-class patrol ships will have the ability to sustain operations for up to four months. The Nanisivik Naval Facility and our future support ships will further extend the RCN operations by refueling and replenishing the ships.

The Arctic and Offshore Patrol Ship project will also acquire integrated logistics support products, jetty infrastructures in Halifax and Esquimalt, and a berthing and fueling facility in Nanisivik, Nunavut.

Irving Shipbuilding Inc. launched the first ship to water in September 2018. The future HMCS Harry DeWolf is expected to start sea trials any day now, and is set to be delivered to the Royal Canadian Navy by the end of 2019.